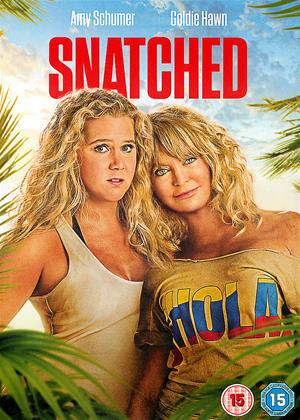 I decided to ignore the below average review rating for this film as I haven't seen Amy Schumer in anything bad & you know what you are going to get with her style of humour plus it had the added bonus of Goldie Hawn in it . I was glad I did as I enjoyed it.

Yes , it's a bit silly but there are plenty of laughs , Schumer & Hawn work well together & the film is entertaining all the way through & moves at a fast pace.

I am bemused by the poor reviews for this & would definitely recommend this film.

Romps along in road trip/hangover style. Ladies whoop it along with hardly any logic or plot, but who cares?

After Trainwreck, which seemed like an extension of Amy Schumers stand up, this feels much more generic. There are some laughs but it just seems a bit of a waste of her talent and Goldie Hawns comeback.

Lasted 20 minutes. Just dire and what has happened to Goldie Hawn's face? Nothing more to sat but I can't post until I've typed at least 100 characters

It’s not every day I get to see an adventure buddy picture with two women bounding and bumbling through the jungle. Even rarer is for that adventure to involve a mother-daughter relationship. Though this somewhat original concoction does carry an air of originality, the mixture still carries a lingering sensation of the lukewarm stumbling comedy.

Emily Middleton (Amy Schumer) is having a down-in-the-dumps time in her life. A failure as a retail salesman, she is fired from her job. Due to her poor choice in boyfriends, she finds herself dumped. Now her planned trip to Ecuador is going to be a lonely one and filled with regret for coming back to her lackluster lifestyle. Still, she’s determined to have a good time and invites her mother, Linda (Goldie Hawn), on the trip. Things could probably turn around for Emily. Maybe she could find a new guy and not be so embarrassed by her mother. It’ll happen but not before a wild adventure where she is kidnapped by men and embarrassed by her mom.

Venturing through the jungle after bad people with guns take them hostage, Schumer and Hawn stumble and bumble through this adventure in the manner one would expect from their comedic talents. Schumer makes odd comments about everything around her and continues to stammer on in her meandering dialogue to see how much comedy can be juiced from every scene. She’s given some plump moments worth juicing but unfortunately doesn’t get much out of most of them. Hawn pulls the old elderly astoundment for the world she inhabits, not too sure about technology or modern music.

Their adventure has some amusing moments but they’re in small bits and pieces with overstuffed elements. For example, Emily’s brother is a home-dwelling mama’s boy played by Ike Barinholtz as the annoying loser who somewhat comes to their aid. His inclusion makes the film come down with a bad case of the tries-too-hard, where Ike tries to eat every scene and struggles to chew, butting into conversations with Klingon talk and movie babble. This format of comedy ruins some genuinely great moments, as when a jungle adventurer leading Emily and Linda through the jungle meets his end early after swinging across a cliff doesn’t work. A great moment of hilarity, sure, but then we must linger as though all eyes are on Emily to keep the scene going with more humor when it really should’ve ended with one punchline and not six stumbling ones.

Snatched isn’t the worst comedy-adventure film I’ve ever seen but there’s very little present here to be anything more than what it advertised. There’s some goofiness of guns where Emily has the villain right where she wants him but can’t bring herself to pull the trigger because killing is scary. There’s some silly banter about how Americans act in a foreign environment and how little Emily and Linda know about trying to survival in the wilderness while gun-toting gangsters chase after them. But for anyone who has had a wild night out with the girls you’ve known for years, this farce goes down as expected with no surprises.