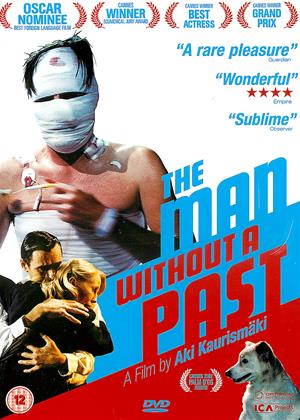 Rent other films like The Man Without a Past

Reviews (1) of The Man Without a Past

Not the film to watch if you think the Finns are deadpan and strange... - The Man Without a Past review by DS

This is a Finnish film set in Finland in the capital city Helsinki although to be honest it could have been any mainland European city as the location was clearly not the star of the movie or important to the story. I’ve been to Helsinki at least twice and could not place the vista at all.

It pays to be aware of what type of film Aki Kaurismaki makes before you view in all honesty. This moves at a very slow-paced. Everything is played dead-pan when I say dead-pan I mean really dead-pan. It is almost anti-acting at some points. There is little to no ‘body-acting’ either, when the dialogue is sparse you do not get eyebrow-raising or gurning to portray what is happening. You need to get used to this because it is an old style of acting and an odd way of presenting characters within a story.

Without wishing to stereotype the Finns are reserved and stoical people so it seems entirely normal that a Finnish film should reflect this. But, like the Finns, inside the story, there is a sense of fun as the story stumbles forward, with plain useless police officers, doctors, nurses and employment office employees to the fore. Only the truly dense could not see the huge signpost Aki Kaurismaki is pointing at his own society here.

Here we see ’M' as our nameless lead is called strive to find out about his past and slowly get closer in dribs and drabs but then when he finds out, I will not spoil this part, but it neatly fits in with the overall style and feel of the story.

With the container homes, the odd assortment of characters overseen by a corrupt security guard and incorruptible Salvation Army you are stepping into as an un-Hollywood film as you could possibly get. The scenery, setting, is not really important as Karuismaki is clearly interested and focussed on ‘M’ and those around him and has directed them to be as plain-faced and dead-pan as possible.

I can see how this film will not appeal to some film-fans with a glacial pace, simple story-line and strange stylised acting but even if Man Without a Past does not sound like your ‘cup of tea’ it might pay to give it a chance. After all, a slice of Finnish cinema has to be the antidote to the endless output from Hollywood.

It’s weird, but like all weird things, some people will take to it and others reject it. It’s all good.