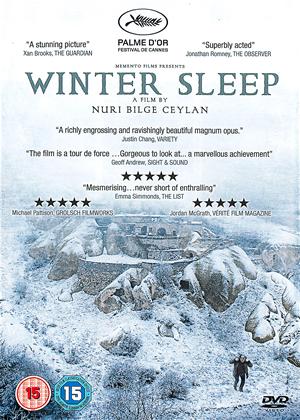 Synopsis:
The 2014 Cannes Palme d'Or winner from Nuri Bilge Ceylan is set in the hilly landscape of Cappadocia in Central Anatolia. A former actor, Aydin (Haluk Bilginer), owns a small hotel cut into the hillside, which he runs with his younger wife Nihal (Melisa Sozen). He has also inherited local properties, but leaves the business of rent collection to his agent. When a local boy, resentful of his father's humiliation by Aydin's agent, throws a stone at a jeep whilst Aydin and his agent are driving in it, Aydin ducks out of any responsibility or involvement. As the film progresses, the cocoon in which this self-satisfied man has wrapped himself is gradually unravelled.
In a series of magnificent set-pieces, Aydin is exposed in his encounters with his wife, sister, and the family of the stone-throwing boy. He is finally brought face-to-face with who he truly is.
Actors:
Haluk Bilginer, Melisa Sözen, Demet Akbag, Ayberk Pekcan, Serhat Mustafa Kiliç, Nejat Isler, Tamer Levent, Nadir Saribacak, Emirhan Doruktutan, Ekrem Ilhan, Rabia Özel, Fatma Deniz Yildiz, Mehmet Ali Nuroglu
Directors:
Nuri Bilge Ceylan
Producers:
Zeynep Ozbatur Atakan
Writers:
Ebru Ceylan, Nuri Bilge Ceylan, Anton Chekhov
Aka:
Kis Uykusu
Studio:
New Wave Films
Genres:
Drama
Countries:
Top 100 Films, Turkey, Drama
Awards:

Ok hands up you got me... I fell asleep 2hrs into this film... not because it was not engaging I'd had a busy day at work and this is a very long movie to comic to if your tired

My partner loved it and savoured every last morsel... despite it Turkish language and earthy feel it is a very human story... which asks many questions on many levels about the human situation. Impressive but you need to be fully alert to savour the morsels on offer.

Superb - Winter Sleep review by BE

Very long so watched in two sessions. It's listed as being 159 mins in length but I think it could have been longer than that. The trailer could be seen as misleading as it is relatively slow moving. It is beautifully crafted, the acting is impeccable and it has a superior script. Foreign films now have the edge in the movie business. The Americans have lost their way and sometimes we're not much better. Subtitles necessary as in a foreign language but much better than being dubbed with a sloppy accent. It all adds to the enchantment of the film. An absolute must for real movie fans.

Very well filmed in an intriguing location. A human interaction drama really with a number of scenes of long but well scripted dialogue. Very long though. Score is the average of a one and a five which perhaps means its not to all tastes. Beautifully done though.

The Director's last movie was 'Once Upon A Time in Anatolia', which was another long film which consisted largely of long conversations on the condition of the human spirit.

This film takes up a similar theme. The main characters and indeed the others, each have a lack of fulfilment in their lives and struggle to fill the gap. The lead character Aydin pores over writing his weekly column for a local newspaper, his wife submerges herself in charity work and so on. At the beginning, unsually structured the hotel they live in (it is carved out of a cave), seems to be a lively and happy home, however as the long conversations turn into arguments, we realise that this is not the case. Meditations on religion, philosophy, loneliness and the general lack of substance in modern life gives the movie its backbone, and the length gives it a sense of epic.

Highly praised, Cannes award winner this is a beuatfully shot film, well scripted and well worth watching if you want to escape the superficiality of much of today's Hollywood's output.

Much too long - Winter Sleep review by KB

My, what a long conversation!

There wasn't much going on, other than discussion after discussion.

I was pleasantly surprised to hear people arguing QUIETLY though.

Lovely scenery, quite atmospheric, but why were there only TWO guests at the hotel?

A long haul and I have to confess being a big fan of foreign films, particularly French ones. - Winter Sleep review by MB

I thought I would try something different, but, this one which no doubt is really superb, I really couldn't go the distance. Sorry.

What a brilliant film! - Winter Sleep review by VC

So, this isn't a film for people with short attention spans! You really have to listen (ie watch the subtitles!) all the time or you miss important points. Unusually, this film has important points all the way through - all three hours of it.

The dialogue is like nothing you would normally hear in British conversations, nowadays, and unfortunately. It is extremely natural, and in fact the acting is incredibly natural. So many facets of the human heart are expressed continually, and yet nothing is forced. I have never watched a Turkish film before, and I was surprised at its depth, which reminded me of Russian writers like Solzhenitsyn and Dostoyevsky.

The filming was stunning - lovely to watch. There were odd moments where images were shown briefly, and I think they must have been symbolic, but they were easy to miss. For example, the dead deer and the crows perched up in the trees. None of those symbolic images were laboured in any way, and they seemed to be expressing brief subliminal thoughts of the characters, rather than some grand artistic point the Director was making.

I also found myself looking at the interiors of the houses, trying to figure out why there were three gigantic garlic cloves (?) in an alcove, or what the strange masks on the walls were! Yes, the film was long, and I also had to do it in several sessions, but some things are worth a bit of effort. Despite the length and the densely packed dialogue, my attention was held all the way through.

I don't know how the Director got the actors to behave so naturally. It must have taken ages to get them all to really "be" their characters.

Totally absorbing and highly recommended, especially for those of us who are starved of real human intercourse in our trivial society.

We gave up watching after about 1/3 of it, as it had only produced some repetitive conversations about (spoiler alert) a broken car window. Whilst the way it is filmed feels very naturally slow, we just didn't have any appetite for another two hours. Based on other reviews, it may have had more to offer, but we just didn't want to find out.

It very much felt like the stereotypical Cannes festival winner, a very long film that put the jury to sleep but, as none would be prepared to admit to it, they gave it the top prize.

For slightly over three hours, we are taken on a journey that examines a set of interesting characters as they are forced to live in extremely close quarters. Coming out of Turkey, Winter Sleep is being released internationally with English (and other) subtitles. I give it two out of five stars, because, while it does have its redeeming qualities, for the most part, it falls short.

Though it could be classed as an ‘ensemble film’, Winter Sleep’s lead character is a former actor by the name of Aydin. He is the owner and operator of a small hotel located in Anatolia, Turkey. He works side-by-side with his younger wife Nihal, and Necla, his sister who is still recovering from her recent divorce. With Winter approaching, guests are leaving the area, and the harsh snow forces the hotel to become a shelter for the neighbours. With the close proximity causing nothing but problems, will they survive, or will their differences prove too great?

Unlike recent Hollywood trailers where you get the entire film in three minutes, I still had no idea what this film was about after I watched its trailer. I don’t know whether it was because they wanted to highlight specific characters and shots, but it did make you have to watch the film. Winter Sleep, in general, dragged out too long, filled with shots that lingered unnecessarily. When I finally reached the character interactions (usually involving lengthy conversations), plot, and sub-plot, I didn’t feel any more informed because of the artsy inclusions.

On a truely positive note, the script was very well done. This is a good thing because the dialogue takes up the majority of the film. The scenery was also beautiful in its blandness. Coming from Australia, these views are so foreign to me, and you really felt like you were in a faraway, isolated, land.

Watching films that showcase the talents of foreign filmmakers is great, but the subtitles are an annoying consequence. While you are taking-in the dialogue, you are missing the visuals that often reveal even more of the story. Subtle cues could be missed, and that is unfortunate because everything in a film like this has meaning.

Critics and audience members alike have had a very positive response. Unlike what most cinema-goers are looking for, most seemed accepting of the slow-burning story. However, if it were not for the engaging and multi-layered characters, I doubt the audiences would have stuck around. It has also won two awards at the 2014 Cannes Film Festival, which is a very prestigious venue.

It was a bold choice to make a film that is almost double the length of normal films - especially in our low-attention era - but, for the most part, it worked well for them. The story had its moments, but with it succeeding in creating interesting dialogue that lasted so long, its faults were almost forgiven.

Being honest, it is not a film you would watch again and again, however, you should give it a go if you’re a film-lover.