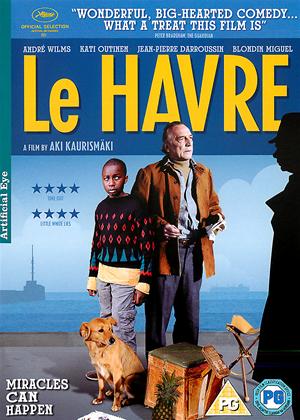 A french 'art house' film with warmth and hope despite the harshness of life. - Le Havre review by CP Customer

This film has charm, hope, atmosphere in a gentle way..it was an interesting look at life for people caught in this particular trap...and despite the difficulty of life shows the good and unselfish side of human character which adversity sometimes brings out. The use of colour and dated fashions, cars, decor, clothes etc was interesting, used to depict the harshness of the lives of those it followed - even though it was written of modern times - was also interesting.

Wooden acting, sluggish directing, amateur production. Quite disappointing. The plot addresses a contemporary social problem which could have been fascinating, but the story line was spoilt by being barely believable.

Liberal writer Marcel Marx (André Wilms) retires to the small port town of La Havre, where he takes a job as a shoe shiner and lives quite happily with his much loved wife, frequenting the local bar and developing a rapport with the locals. Marx’s life changes suddenly when his wife is taken seriously ill and a young refugee appears on his door step on the run from the police.

Marx, clearly the good hearted bohemian, takes in the boy, Idrissa (Blondin Miguel), who is on his way to London from Africa, and the two develop a moving relationship and the offers the audience a beautifully vulnerable face to put to the hoards of desperate refugees depicted on the news.

As one would expect from a film of this nature, La Havre is both sweet and emotional, yet, in spite of its success at last years’ Cannes Film Festival where it received a special mention in from the Ecumenical Jury, the film does not quite reach the full potential of its emotional depth. Fans of director Aki Kaurismäki have contributed this largely to the fact that the story is told in French, rather than his native Finnish, however those unfamiliar with Kaurismaki’s work would struggle to put their finger on precisely what this film is lacking.

This is not a fun film, but there is a gentle hopefulness to it that is sincere enough to leave Goosebumps on the skin. The story is also completely enjoyable, despite it’s melancholia, it’s subject an uncomfortable one that is depicted with a very human and honest voice; the progression and outcome of the piece is fairly predictable yes, but that does not make it dull.

This is far from a bad movie, far from it, it has plenty of charm whilst the story seems to evoke genuine emotions from the performers as they play out this nice, if not hugely imaginative or outstanding, story.