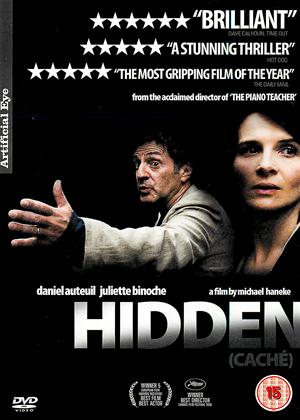 Only Europe could make a film such as this, which leaves you with more questions than answers. Michael Haneke lays out a course of events, with the emotional scars and consequences evident on both sides. Yet who is behind the tapes? Who is guilty and who are the innocent bystanders here? How can Georges and his family cope with the course of events and the pressure to stop matters spilling out of control?

Juliette Binoche is excellent, it is a shame she isn’t onscreen for longer, but while their relationship forms a part of the tale, the spotlight falls on Daniel Auteuil’s character. Some aspects of the plot and repercussions will be lost on us, the non-French, but that ending will have you trying to second guess everything, or at least playing it again. The film is about guilt; I suppose how we deal with it whether it prompts anger, revenge or acceptance and resolution. We all deal with it in different ways and there is no right or wrong answer. Hidden is a very intelligent thriller, perhaps in reflection a little pretentious for its own good.

The opening credits roll to a scene of a typically small French town street. Nothing is happening. After a few minutes voices are heard. Discussions are heard apparently between husband and wife. A daringly dull start to a film. The outstandingly good things about this film are the acting and the filming. This is however balanced by a plot that is not well constructed, has several unexplained and irrelevant mysteries, and doesn't end but fades away. The only shocking moment is a totally unrealistic suicide almost amusing in its unbelievablity. There is a moral to this film but it could have been done either more or less shockingly according to taste but pleasing few as it stands. Binoche distracts from this with a magnificent performance again.

Can't believe this film has only 3 stars. All I can say it's not for the unintelligent or those who like all the answers. Deep, profound. Full of signs and symbols and questions. Why are Binoche's clothes so profoundly dull? Who is really being persecuted?

And who is making the videos? - The answer to which sorts the wheat from the chaf.

Great director and cast and intriguing story-line but I was not entertained by a film raising questions and not providing answers. Audience participation is really required to decide who, why, what, where and when. Novel, but not for me.

Really great perfomances from the 2 leads who are 2 of our favourite actors. Unfortunately the story was not as thrilling as we had hoped and it was a bit boring.

Successful middle class, middle aged man loses his stability and certainty as he begins to receive videotapes of himself and his family. Fascinating story about class, surveillance and the guilty legacy of French imperialism plays out like a many layered, very violent thriller.