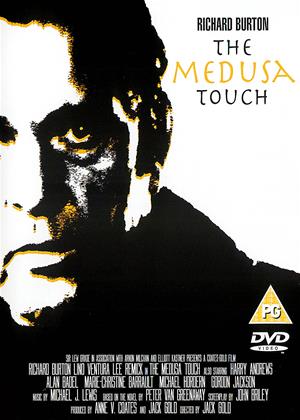 Reviews (2) of The Medusa Touch

Turned Me To Stone All Right. - The Medusa Touch review by NC

There is some important stuff trying to claw its way to the surface of this film:- how can we stop the insanity of spending billions on arms and war, whilst spending pennies on peace? How can we stop the insanity of spending billions on space travel and nuclear energy, whilst spending peanuts on poverty and clean energy? If you had the power to crumble in your hand the whole stinking establishment, (the lawyers and judges, the politicians, businessmen, churchmen and royalty who represent this evil madness), how would you do it? Unfortunately this interesting, political light only splutters into life now and again; and in the end the film stops short of concentrating on WHY one man may hew this power, in favour of the crowd-pleasing option of him just doing it, accompanied by spectacular special effects.

'The Medusa Touch' consists of a police investigation into the assault on John Morlar, a writer, and someone who claims to be able to cause disasters just by thinking of them. Flashbacks into Morlar's life flesh out the story. It never really becomes more than a just above average policier (and only then because of the outstanding cast) with an element of average, fairly boring, horror thrown in for good measure.

Richard Burton gets top-billing, though we see him only sporadically, in the flashbacks. Even so, there are a few scenes, especially one in a courtroom, where he shifts into top gear, and if the hairs on the back of your neck don't start to tingle you've probably just passed away peacefully. The great Lino Ventura plays Inspector Brunel. (How good would it have been to see a confrontation between Burton and him?) He isn't given very much more to do than shuffle about asking questions, and, whereas his quality cannot help but shine through, it does seem a waste of a major talent. Lee Remick is too cool. What an effort it appears to be to raise an eyebrow, let alone the voice or an emotion. Michael Byrne, Derek Jacobi, Harry Andrews, Alan Badel, Michael Hordern, Robert Lang, Avril Elgar, are all, as you would expect, excellent, and lift the film considerably.

There is unintentional hilarity at the end, as polystyrene columns straight off the sets of 'Dr. Who' or 'Blake's 7' rain down on a crowd pretending to be terrified.

Effective Thriller. - The Medusa Touch review by BC

I saw this film in the cinema, way back when it was released.Thoroughly enjoyed it then and great to watch it again. An effective thriller with an  A list cast who make the story plausible and chilling.