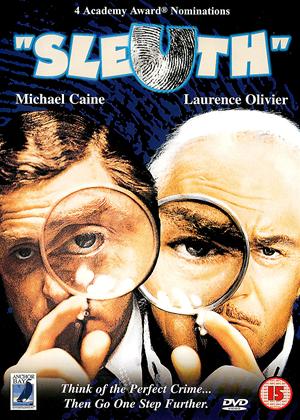 Why have I missed this superb film until now? - Sleuth review by RP

Why have I missed this superb film until now? Made in 1972 and starring Lawrence Olivier and Michael Caine, I enjoyed this immensely. It has the feel of a stage play (it was adapted from one) but it works very well as a film. The acting is superb: you would expect no less of Lawrence Olivier, but Michael Caine is surprisingly good. Although I have seen most of his films, he displayed real acting ability which surprised me: he usually just plays Michael Caine :). And the location setting in a country house filled with automata and games is superb.

The storyline goes like this: Caine plays an Alfie-like character who is having an affair with Olivier's wife. He is invited to meet the cuckolded husband, an author of detective novels, who offers a money-making proposition: steal his wife's jewellery while he claims on the insurance. This is planned as a humiliation - but there is a twist in the tail...

The dialogue is sharp and witty, the characters show a degree of class rivalry and racism which is well observed and perceptive, and not out of place today. Yes, the characters themselves (and the hairstyles!) are somewhat dated, but the drama itself is timeless.

Both actors and the director (Joseph L. Mankiewicz) received Oscar nominations, but unfortunately lost out to 'The Godfather' which was released the same year. All I can say is that Marlon Brando's acting isn't a patch on what you'll see here.

The review by RP gives you a good overview of the film. The plot is cunningly and craftily put together. The acting is simply superb. Both M Caine and L Olivier are unforgettable in this sadistic and complex game of humiliation and counter-humiliation, against the background of class differences.

If you have not seen this film, you must. Probably the best movie I have ever seen.