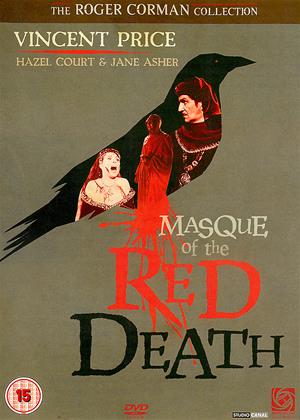 Synopsis:
Vincent Price stars as the evil Prospero, a Prince who has sold his soul and who counts on the promises of the Devil for protection. He hosts incredible, opulent parties for the privileged while toe poor die in hovels, starving victims of the Red Death, a devastating plague that is sweeping his lands. Prospero takes a perverse pleasure in the pain and suffering of his supplicants and his friends alike. When Prospero decides to hold a masked ball all seems ready for a night of unheard of indulgence and decadence, until he notices the entry of a mysterious hooded stranger dressed all in red. Believing toe figure to be his master, Satan, Prospero determines to seek him out...Based on Edgar Allan Poe's short stories,
Actors:
Vincent Price, Hazel Court, Jane Asher, David Weston, Nigel Green, Patrick Magee, Paul Whitsun-Jones, Robert Brown, Julian Burton, David Davies, Skip Martin, Gaye Brown, Verina Greenlaw, Doreen Dawn, Brian Hewlett, Sarah Brackett, David Allen, Dorothy Anelay, Gerry Atkins, Jill Bathurst
Directors:
Roger Corman
Producers:
Roger Corman
Writers:
Charles Beaumont, R. Wright Campbell, Edgar Allan Poe
Aka:
The Masque of the Red Death
Studio:
Optimum
Genres:
Classics, Horror

Unavailable
The Woman in Black

Reviews (3) of Masque of the Red Death

Surprisingly... - Masque of the Red Death review by RD

...perverse and hypnotic, for a Corman production. Masque of the Red Death is for me a real diamond in the rough, it's a film that belies its low cost interior and manages to seduce, in part because Price lowers some of the hamminess and what's there fits with the feel of the film. It also has an appropriate perverseness to it, again helped by the performances from Court, Asher and Magee, especially Asher. The 'hero, well, ignore him, he doesn't matter in the least, just sit back and enjoy a surprisingly hypnotic Corman movie that is far more than the sum of its parts and actually, its parts are pretty damn good.

So wretched were Roger Corman's early films (Viking Women, The Wasp Woman) that it's tempting to look at his this later horror classic and wonder if there is some other hand at play. Maybe Twilight Zone veteran Charles Beaumont who wrote the literate and philosophical script. Or Nicolas Roeg who filmed the rich colour palette of the six illustrative rooms. True, Corman's work had improved in the sixties, and his other Poe derived films were fine, but this is on another level. It is a medieval allegory (influenced by Ingmar Bergman's The Seventh Seal according to Corman) about how unchecked power will have a tendency to end in atrocity, Vincent Price is perfect as Prospero, the aristocratic Satanist who machinates as the plague closes in on the domicile of his empire. Corman criticised his British crew for working too slowly. This was made in five weeks rather than his usual four! But they produced the the best film of his long career.

Long-winded and stagey. - Masque of the Red Death review by NP

I have to admit it: the appeal of Roger Corman’s films are mostly lost on me. Despite its flaws, I enjoyed his ‘comeback’ ‘Frankenstein Unbound’, but every other production I have seen under his name I have found uninvolving, stagey and a bit of a chore to get through.

This effort boasts the charms of Hazel Court and a very young looking Jane Asher, and they both are excellent but strangely without much in the way of character. The same may be said of Prospero, played by the mighty Vincent Price, who saunters and sneers wonderfully through it all. For all his evildoings, his villainy is strictly pantomime in nature.

The story is the weakest link for me. A mash up of Edgar Allan Poe, with references to ‘Hop Toad’, the Raven and even the Pit and the Pendulum, without doing much that is interesting with them – Hop Toad being the exception, due to Skip Martin and Patrick Magee.

A series of set-pieces do not make a riveting story, and despite the visual colour and vigour of the theatricality, I couldn’t muster up much in the way of enthusiasm for this, sadly. My score is 5 out of 10.