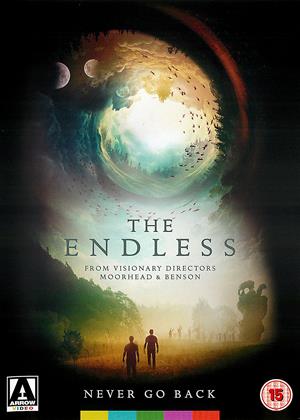 Reviews (16) of The Endless

An original, surreal movie - The Endless review by MC

I was surprised at how much I enjoyed this. It's the kind of film that is probably not going to be fully understood on its first viewing, although the plot is not overly complicated. I found that the suspense was built up quite skilfully so that a film that starts out quite slow actually gets quite tense and "scary" by the hour point. It may be too surreal or avant garde for many, but if you enoy trippy, thought provoking, slow-ish yet atmospheric movies (the music is superbly ethereal on blu ray) then you may well enjoy this as much as I did. If you enjoyed the indie movie "Coherence", you will probably enoy this.

Fortunately not actually endless. - The Endless review by NC

It does finish, which is a bonus. Off the cuff films can work, but found this a bit of a Stephen King off-shoot oddity. Never really got worried about anyone in the film. Just too silly to be fair.

A game of 2 halves! - The Endless review by RQ

I just about managed to get through the first DVD but the 2nd one was absolute rubbish !

There was a feeling of 'LOST' in the first DVD with a lot going on that made you try to think what was going on, but there was a sort of story there.

We watched the 2nd one at the weekend and its basically 2 hours of my life I will never get back!

We stuck with it to the end (although my wife was in favour of turning it off) in the hope something would at least make a bit of sense and that could be tied back to the 1st one, but the tenuous link was totally lost so I'm afraid this was one I want to forget !

By the end I was Glad it was all over . Not that I didn't enjoy it but t did seem to be far longer than it needed to be ,Much of it filling space with Nothing happening at all.

It was OK, not Great just OK. Interesting idea to base it around a Culty Commune but that was really just a Red Herring . Darker Forces are at work here ,Sadly we never really get to see the Real Culprit . Just flashes of its effects on others.

The Movie felt Slow and meandering with little to no story through much of it so by the time we finally do figure out what the Story is you are kind of Bored already and just want it all to finish ASAP.

Worth seeing if only so you never have to watch it again. Its kind of like watching a meandering TV Show ,imagine watching 'Under The Dome' or 'Lost' all in one sitting but with ALL the interesting bits Cut out . that was what it was like .

Worth persevering Sci-fi movie - The Endless review by rh

The producers/writers/actors made a decent job with a small budget. Two brothers return to the camp/cult they escaped from a decade before. It turns out not to be as bad as they remember as young men. After a night some uncanny events come up which everyone else thinks is normal. Soon they encounter some mysteries in which one layer is lifted to reveal another reality. Piece by piece the viewer and protagonists are shown the truth behind the idyllic camp.

Not even a B movie - The Endless review by KF

Dear me, what rubbish. I don't know who write the script but the dialogue was abysmal. I didn't get the purpose of the second disc but trust me it's not worth watching and the dialogue is even worse than on the first disc. Throughout, the film is peppered with uninteresting, irrelevant inconsequential scenes which ruin the momentum.

Original - The Endless review by AL

This film was like nothing else I have watched. The plot went off in different directions, but made a sort of sense. My recommodation is to just go with the flow, and let what's happening unravel. I never got a second disc, and wonder if there was something on that which resulted in the negative reviews.

Dated and dull - The Endless review by TE

For the first 15 minutes or so this film offers the promise of an interesting tale, but it falls to embarrassing pieces once life in the cult / commune gets underway. There is an annoying air of tricksy self-pleasuring by the writers and directors. In attempting to be clever they deliver a dud with many unintentional laughs.

The whole time loop concept has been done to death and this film is not about to bring it to life again (and again and again...).

It is without a doubt Endless! - The Endless review by LU

RUBBISH ! - The Endless review by pe

One of the worst films i' ve seen - didn't bother with the 2nd disc - life' s too short.

My partner gave it 15 minutes, whilst I ( foolishly ! ) stuck it out to the end.

Great little, out of the ordinary, low budget film which is very thought provoking. The plot unravels slowly and the weirdness gradually becomes more understandable (sort of) as it unfolds! I have been thinking about this film a lot since I watched it!

I’m going to do something I rarely do and begin my review with a spoiler. The Endless is a micro-budget supernatural thriller that exists within the same universe as the other film by Justin Benson and Aaron Moorhead, Resolution. I doubt it’s a spoiler considering few have seen that brilliant found-footage movie but they really should, considering discovering this crossover blew my mind and turned the very concept of this film to become infinitely more fascinating.

Justin and Aaron are brothers that were formerly members of a cult in the woods. They differ in their memories. Justin remembers them as a UFO death cult but Aaron has much fonder recollections. It’s all that has been on their minds since their deprogramming hasn’t led to the most active social life. With nothing to do, they decide to confirm their suspicions and take one day trip to the cult to see whose memory is more valid. Being a thriller, your alarm bells are probably going off at the very idea. But, hey, what else are they going to do? Find another cult?

For the first act, all is going smooth and subtle around the happy camp, with the odd exception of all the members seem to have not aged since Justin and Aaron left. It’s a mystery that will be answered later but for the time being the brothers are busy trying to connect with their relation to the cult. They become so used to it that they decide to stay another day. Another bad idea but if they leave now they may never know the disturbing truth.

And disturbing it is. Without revealing too much, they stumble into a trap where time is stuck and any escape, be it from the forest or life, seems impossible. Why this is happening is kept very ambiguous. Yes, this is in part to keep the budget low, but at the same time, it creates a mystique about the nature of what’s going on. Sometimes there’s a creepy tape that reveals more clues and other times it’s a monster that can’t be fully explained. The imagination becomes the best playground for this material that is very terrifying in its own right.

Still, there are some impressive special effects with the time looping curse. It’s the simplest elements that make it the most effective in the cutting and sound. One camper is discovered where he is caught between life and death, splitting at times. Another will be stuck in a perpetual repeat of the same ten seconds over and over and over. And there’s the biggest surprise as aforementioned that ties the story right back into Resolution and yet still keeps thing unsettling and mysterious.

The Endless presents the biggest argument for how you don’t need a big budget to produce the most interesting and engaging of film, even within the genre of sci-fi horror. Every filmmaker should take note of what Justin Benson and Aaron Moorhead have done here, weaving a film that becomes terrifying and trippy with so little. There’s a great uneasy present comparable to the likes of David Lynch and Alex Garland but working with much less. And they even managed to bring a connected universe into this film as well! Brimming with originality and creativity, this is top-tier entertainment from low-budget filmmakers.