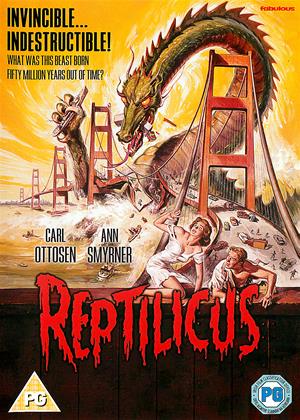 Apparently this film is an example of "Classic Sci-Fi & Fantasy". I can only assume that if the folks who come up with descriptions of films around here don't know whether something is a "classic" in any meaningful sense of the word because they haven't watched it, they drop the DVD on the floor and if it lands face up, it's a classic. Or maybe they ask the cat.

This movie is so mind-bogglingly dreadful that I feel a bit guilty about giving it one star, the way you would if you were honest about the artistic merits of a four-year-old's crayon drawing instead of sticking it on the fridge door and pretending it's a masterpiece because he did his best, bless him. But since all the people responsible for this woeful effort were old enough to cross the street by themselves and everything, I have to tell the truth and say it really is one of the worst films ever made. And I don't mean that in a good "Plan 9 From Outer Space" kind of way. It has none of the goofy charm that makes some dreadful movies weirdly enjoyable. It's truly painful to watch. And judging by the facial expressions of some of the cast, it was torture to actually be in.

Way back in 1953, a modestly-budgeted B-movie called "The Beast From 20,000 Fathoms" was a huge hit, entirely thanks to the legendary Ray Harryhausen's superb stop-motion monster. The following year, a Japanese semi-remake/rip-off called "Godzilla" was an even bigger hit, and the rest is history. "Reptilicus" is a much more faithful remake of "Beast" than any of The Big G's outings, but strangely it wasn't a hit. Apparently the world wasn't ready for the surreal spectacle of Denmark being invaded by a giant prehistoric muppet. Even though great care is taken to prevent us seeing all of Reptilicus at once, it's obvious that the puppeteers can't quite control the unwieldy marionette, resulting in a strange lopsided lurching motion which, together with its constant projectile vomiting, gives the impression that the poor thing isn't at all well. The miniature scenery in which this pathetic rampage takes place is even worse, especially the horrendous mismatch between footage of the real Copenhagen and replicas of the same buildings that look like, and probably were, cornflake packets painted brown. In terms of Doctor Who special effects over the years, we're talking about Patrick Troughton on a bad day.

Which would actually be hilariously, if only the many scenes not involving Reptilicus weren't such an ordeal. Obscure Danish actors, many of them strangely ugly, give dismal performances further worsened by American dubbing that wouldn't even get a pass in a spaghetti western. The irrelevant romance that always clutters up films of this type turns into a ham-fisted excuse to pause the action while they show us a holiday commercial, complete with a terrible song about the joys of dining out in Copenhagen. At least the Danish army seem to be enjoying themselves as they merrily trundle their tanks around the countryside, blaze away at the conveniently offscreen monster, and set up field-guns next to the Little Mermaid statue to prove they aren't stock footage. Audiences were less enthusiastic, and the sequel set up by the ambiguous ending never happened. Apparently this is the second English language cut, the first being deemed unreleasable because it was even worse. I honestly can't imagine how it could have been.