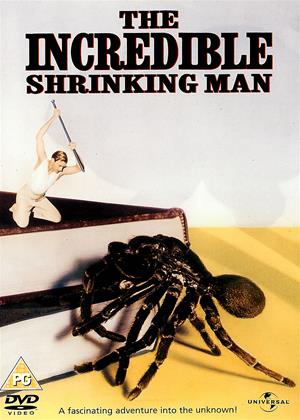 Reviews (2) of The Incredible Shrinking Man

This film is old but still works. It is wonderfully imaginative with the special effects as the main character shrinks. Very clever use of clothes and household items to show that and not tell it.

It's all great fun too, with dramatic music and jaw-dropping (for the time) special effects. It is way better than the modern Mat Damon movie DOWNSIZED too which went on and on. No flab on or in The Incredible Shrinking Man!

I actually turned off a modern film which was boring me to watch this one. I had seen clips before but never the whole thing. I am so glad I did.

It's very 1950s with the nuclear threat and cold war hanging over it like a cloud - literally.

They get the media circus just right - it would be the same but worse today.

And how refreshing to watch a great entertaining film with no agenda to push, no boxtick casting, no yawnsome CGI effects.

But what happened to the cat? That's what I want to know.

The ending is of its time, I suppose. Based on a novel by the man who wrote the screenplay, apparently.

Classic stuff anyway. I could watch it all again now. 5 stars

Behind this schlocky fifties exploitation title there is an intelligent sci-fi action film. Exposed to a radioactive cloud, Scott Carey (Grant Williams) begins to lose size. As he does, his relationship to his comfortable, materialistic lifestyle begins to shift.

Experimental medical treatment arrests his decline for a while. When he again begins to lose mass, he eventually falls into his cellar and is presumed dead by his despairing wife. This last third of the film below ground is about Scott's fight for survival, particularly a brilliantly staged combat with a (relatively) giant spider.

Scott finds meaning within confines of his new universe which he had lost as diminished man in the normal sized world. Eventually he loses a sense of his physicality and becomes a transcendental being, freed from the limits of his human perspective.  It's astonishing that Universal allowed the film to end like this. They really wanted Scott to be cured and to return to normality and his old life... which would have been absurd.

This was adapted from his novel by Richard Matheson- his debut film. He would go on to find a home on tv's The Twilight Zone and this is the sort of intelligent, altered reality science fiction that programme specialised in. This is easily the best film of sci-fi/horror expert Jack Arnold. The visual effects of the shrinking man's changing relationship with his environment are most impressive, but it is his interior, philosophical world that leaves the greater impression.