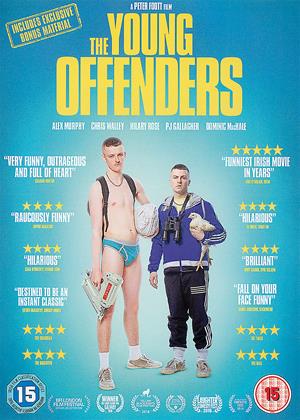 Reviews (1) of The Young Offenders

What Language were they Speaking - The Young Offenders review by AA

If ever a film needed sub titles it was this one.  I had real difficulties trying to understand the what was going on.  The premise has been used before and could have been a decent film,  if I had better understood the spoken word.  Did put me off ever thinking of going to that part of Ireland for a holiday.   In the end it became rather stero typical and the humour ran out!

The Young Offenders is a laugh-out-loud Irish film set amidst the biggest cocaine seizure of Irish authorities till date. In it, two young blokes set on a quest to find this missing cocaine (worth 7 million euros) in a hilarious heist that involves broken bikes, police sirens, amateur espionage, and characters that speak volume about Ireland’s current political current, word play being intentional.

The film is directed by Peter Foott and stars young talents Alex Murphy as Conor MacSweeney, Chris Walley playing Jock Murphy, and Hilary Rose portraying Mairead MacSweeney among other actors. The Young Offenders takes place in the city of Cork, showing all shortcomings of the area and the fatal flaws of its dirty and distasteful residents. Stereotypes aside, The Young Offenders is full with brilliant comedy, mostly owed to the perfect comedic timing of the two young leads, as well as the tightly-executed script that avoids cheap jokes and tells it as it is: raw, often times incomprehensible, and downright grubby. Which leads us to the humour.

Now, the humour will resonate more with an Irish audience than, say, an American one, but that doesn’t detract from the experience and a well-read viewer should recognise and act upon this little stomp of brilliance. By laughing with the characters in their quintessential quest to dig up a long-forgotten gold in the form of a seven million euro missing cocaine shipment.

When one comes to think of it however, the film is not so much about getting-rich-quick, but rather about dealing with the hardships of cultural isolation, low or no income, and other issues that plague almost every normal city in the world. In fact, Conor and Jock’s struggles and their endurance thereafter make these rogue protagonists likeable and someone to be cheered at, despite all of their shortcomings which, to be honest, are more of a societal thing than their own personal fault. Throw in some Cork banter here and there and put these “lads” into seemingly impossible situations, and you have yourselves a funny film dear folks.

In regards to The Young Offenders issues, there are little to none whatsoever, and if there ever were troubles with the film, they wouldn’t be located in any of the filmmaking techniques used to produce this tiny brilliance of Irish cinema. Rather, these issues (which are almost non-existent) would be cultural, i.e. having trouble understanding the Irish colloquial speeches these protagonists use, which is more an educational issue than a filmmaking one.

Finally, if you enjoyed Lock, Stock, and Two Smoking Barrels, and want more of the same only with an Irish stint, then The Young Offenders would fit that bill. Popcorn optional.