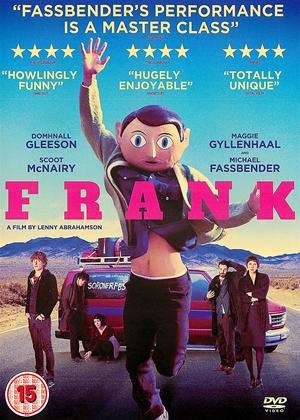 Not everyone will like this film, but nobody can deny that it makes a change from the usual formulaic Hollywood fare - it's nice to see a movie about a mysterious man in a mask who isn't a superhero for a change (though if he was, he'd definitely have the most eye-catching but least practical mask of the lot, unless they ever get around to making that Flaming Carrot movie).

In case you're wondering, this is NOT the Frank Sidebottom story, despite being co-written by Jon Ronson, the keyboard player in the Frank Sidebottom Big Band, even though it's about a very eccentric musician called Frank who wears an almost identical outsize fake head. This Frank is basically a cross between Captain Beefheart - the album the band spend half the film trying to make, and the strange, obsessive conditions under which they make it, are obviously meant to remind us of "Trout Mask Replica" - and the outsider musician Daniel Johnson; he's a very sick man who defeats his inner demons - partially, at least - by adopting an absurd persona that makes perfect sense to him, and meticulously creating what he honestly believes to be music expressing his true genius. Of course people laugh at him - who wouldn't? - but they're not meant to.

In many ways, it's a fascinating, sometimes hilarious, sometimes tragic view of the lives of a band composed of misfits, most of them either probably or definitely mentally ill, doing their own thing and not giving a damn what the world thinks, to the extent of having a name nobody can even pronounce, let alone remember (I certainly can't). Since this is not your standard struggling-rock-band tragicomedy, very little that happens plays out quite how you expect it to, and that's one of its strong points, another being good performances from most of the cast, and a superb one from Michael Fassbender.

Unfortunately it's not perfect. Given the fairly small main cast, it's a pity that some of the characters are so underdeveloped, and I found it hard to believe that these people could live and work together with no other company for a whole year without developing slightly more team spirit, which makes it hard to care whether or not the band breaks up when, as in every movie ever made about a rock band, it seems likely that this may happen. Luckily Fassbender's performance holds it all together - he really is almost unbelievably good, considering what he's wearing on his face. Well worth trying if you want something different.

Maybe not for everyone but this film is absolutely nuts. A great satire on off the wall, avant garde artists and their artistic endeavours transforms itself at the end into a moving comment on mental health. I loved it, my partner didn't get it all.

This is not mainstream, it is not even close. Generally I do not like arty films made to appeal to film festival critics but this is wryly interesting. Essentially Frank is an indie singer / song-writer who prefers unpopular music. One of the other members of the band admires him and is positively opposed to popularity. Most of the band members have some sort of mental illness. The story however is told from the point of view of a new band member who never fits in very well partly because he is sane. The whole thing is gently, humorously, mad, even the stabbing.

When one reads in the description of a film that it involves a character who lives, almost constantly, with his head inside a large papier mache cartoon style head it provokes a certain sense of curiosity; I did not expect the story of Frank to be one of clashing personalities, flawed characters or an exploration of the way in which society vocalizes or presents its emotions. Don’t ask me what I did expect, but it was definitely not that.

A wannabe musician, Jon (the gorgeous Domhnall Gleeson) obsessed with fame and success finds his lucky break with the keyboardist of an unusual band leaves after having a mental breakdown, where most of us would take that as a sign that perhaps things within this particular musical collective were not all they were cracked up to be Jon brings his talent and obsession with social media into the close knit band family; joining them in an isolated cabin where they are attempting to complete an album.

Fronted by the papier mache headed Frank (Michael Fassbender) the band is a melting pot of personal unease and poor confidence, Jon finds his need for success pitted against the desire of the other band members to remain exclusive, elitist and creative. Whilst Frank – who had always appeared as the strong backbone of the group – finds his once unquestioned confidence questioned.

Beyond an investigation of the impact of outside forces on our understanding of ourselves, there isn’t really any story to Frank, instead it is an opportunity for a selection of already talented actors to stretch their creative muscles; Maggie Gyllenhaal plays the fierce and determined Clara, who sees Jon as a dangerous parasite, looking to destroy all the band stands for, whilst Fassbender’s Frank is nuanced and conflicted his emotional struggle innovately performed and effectively communicative despite his obscured face.

There is a lot to Frank, some comedy, a lot of introspection, a well-managed score and well written, handled and performed characters. It is not quite a movie that I could say I “liked”, though I did derive a great deal of pleasure from it. I would recommend it to those who enjoy seeing the world through the perspectives of others, peeking behind the curtain of outwardly presented confidence and questioning how much of where we place ourselves in culture/society contributes to our understanding of our own selves.