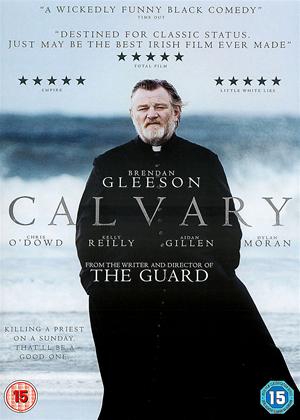 Father James is a compassionate, liberal-minded priest who, we learn, took ordination in later life after being widowed. Sadly, the parish in which he finds himself is one in which cynicism and duplicity abound. Many members of the community still attend Mass, but outside of church they are openly contemptuous of the priesthood and seem to take perverse satisfaction in antagonising him and trying to undermine his faith. One day in confession, a male parishioner recounts - in uncompromising detail - his experiences of childhood rape at the hands of a priest. The perpetrator is dead, but as a means of retribution against the Church he intends to kill Father James, who he instructs to meet him on the beach in a week's time.

Over the next few days, the Father goes about his parochial duties as normally as possible. Among the people he tries to help are a former banker whose opulent lifestyle has left him feeling hollow, a gauche sexually-frustrated young man who is contemplating joining the army, and, improbably, a teenage serial killer who claims to be seeking redemption.

The dramatic tension inherent in this simple idea is exploited to the maximum by J.M. McDonough and the cast. It is highly atmospheric, the camerawork consisting of mostly tightly composed shots, with close-ups of Brendan Gleeson's face at crucial moments in the story and occasional menacing aerial shots of the famous flat-topped mountain that overlooks the village, and without any intrusive music. We are kept guessing until very late the course of action that Father James will choose - flee, go to the police, passively accept his fate or even defend himself with a pistol he has unlawfully acquired. He is a conscientious man but flawed enough for us to relate to. Towards the end he struggles to maintain his dignity and sobriety in the face of his death sentence and the increasing hostility he faces from the community.

Some may find the eccentric characters and understated dark humour to be at odds with the grim subject matter, and I personally thought the hospital morgue scene with Teresa (Marie-Josee Croze) was misjudged - she seems far too calm and rational for someone who's just lost her family in a road accident.

But all in all I found this a very brave and original piece, and one of the most powerful films of the year.

brilliant film, but a comedy it ain't - Calvary review by CP Customer

This was one of the best films I've seen in a long while, and I'll be contemplating its meaning for a long time. Father James, as portrayed brilliantly by Brendan Gleeson, is a truly good man, just what you'd hope a priest would be - a man who has lived, and loved, and who understands human frailty, especially his own. He faces his own Calvary with absolute courage, even though he has plenty of opportunity to save himself. So why oh why is it classed as a comedy? There are a few very black comedic scenes, but for the most part this is a very deep and serious film, about life, death, abuse, grief, love and loss. Anyone looking for a comedy would be very disappointed. Luckily I had read reviews beforehand. A truly great picture and Brendan Gleeson well deserves the praise and recognition he has received.

I enjoyed 'The Guard' immensely, so had high hopes for 'Calvary'. All I can say is 'thank goodness for the fast forward button!"

This film stumbles from one overly-long, disjointed scene to the next, with a total lack of reason or logic and, fatally, no engagement with the characters. While a 'snap-shot' approach can work, in this instance it fails.

Definitely one to miss.

3 out of 12 members found this review helpful.

It isn't a comedy! - Calvary review by CP Customer

I have no idea why it has been classed as such. There is undoubtedly an element of black humour to be found but its not the predominant tone of the film at all. I would describe this as a theatrical piece in that it is a thought provoking study rather than a tale with an unfolding plot. It focuses on the betrayal and alienation of a priest committed to his calling in a parish of troubled inhabitants. Death and forgiveness are some of the themes explored and there is recurring focus on victims of abuse within the Catholic church which, among other things, prevents this from being a merely black and white allegory. Personally I found it a really interesting film, brilliantly acted and I'm glad that I saw it but if you're after a comedy in the style of The Guard then look elsewhere!

I agree with many of the previous review's this is NOT a comedy by any means of the imagination but.. it is an excellent examination of the Catholic and indeed the Christian faith through the excellent Brendon Gleeson in his role as a rural priest. As a Christian myself I empathised greatly with the way he is surrounded by cynicism, criticism and insults. Somehow he manages until the very last straw to keep his cool and does so in a way that makes you extremely symathetic, which is just as well given the later scenes. Fab ending as well, would never have believed it!

Although the main plot line is unlikely, the film is so much more. A member of the congregation in a tiny catholic village goes into the confession box and tells the priest he is going to kill him in a week's time because he was raped as a boy by another priest and the listening priest is going to be the target of his anger. The priest would obviously recognise the voice and at one point says he knows who it is but then retracts this. No one in their right mind would not mention this to the person concerned when they met again. But they don't. In this and a few other lines of plot there has to be some momentum of trust with the writer. The cast is incredible. The intense love between the priest and his daughter is brilliantly played. Some of the dark humour is laugh out loud. There is a lot of genuine dark drama and it is in my opinion mainly a drama around a remote Irish village. Brendan is totally charismatic and well worth watching.

The Wild West of Ireland - Calvary review by CM

The sleeve called it 'comedy' - barely 'comedy', but tragedy with a few laughs, as a good, intelligent priest faces a death threat & the temptation to save himself, highlighted against grotesque characters (no-one really needed to enter the confessional, as the parishioners waved their deeds & mideeds out in public), & the horrible history of Ireland & of the Catholic Church. Well-made, sound performances, played against the heartbreaking beauty of the West of Ireland.

1 out of 10 members found this review helpful.

Brendon Gleeson at his best - Calvary review by AR

I thoroughly enjoyed this actor's performance in a film which showed him as a straight yet contemplative and wise man, slightly over the middle continuum of middle age with an impressive dry wit.

I took out the film because of its dryness, dark humour and hint of bizarreness and I wasn't disappointed.

It has a hint of a foreign film to it and this is reflected in its artistic cinematography, location setting and insight into an Irish culture.

I haven't watched The Guard and it doesn't look my kind of film, but perhaps viewers of Brendon Gleeson in Bruge would find this film more up their street.

When The Guard was released nobody knew what to expect from first time director John Michael McDonough. Part of what made the discovery of his fresh new voice exciting was that The Guard was a complete unknown and the comedic stylings he proceeded to charm us with were nothing short of magical. His followup however is more a strict drama and while the same authentic voice is on offer the film misses some chances and feels a little too heavy for McDonough’s signature style.

Calvary follows Father James Lavelle (Brendan Gleeson), a kind hearted Irish priest who is one day presented with an unknown threat. When he is told by one of his paritioners that he is going to kill him in a week he faces a week long struggle with his faith, his idea of good and evil and parts of his past he wishes would stay dormant. However the arrival of his daughter Fiona (Kelly Reilly) complicates matters as he struggles with the possibility of having to say goodbye to the one part of his past he doesn’t regret.

Much like The Guard, Calvary is well suited to Gleeson’s tough veneer. The film portrays multiple sides of a man of faith but also of a human being. The film doesn’t glorify or vilify religion, instead it discusses the nature of men and the thoughts that govern our lives on a daily basis, but these thoughts find themselves compounded by this limited time frame. Gleeson gets right into the heart of James as he sinks his teeth into some delightfully macabre scenes that debate the good of every man, even the one seeking revenge.

McDonough uses the beautiful surroundings of Ireland to put viewers in a contemplative mood while also encouraging them to play detective as they try to get to the heart of why someone wants this man dead. The film uses comedy sparingly and those expecting a follow up to The Guard will probably be disappointed but those looking for an intelligent look at the nature of faith and its impacts on humanity are in the right place.