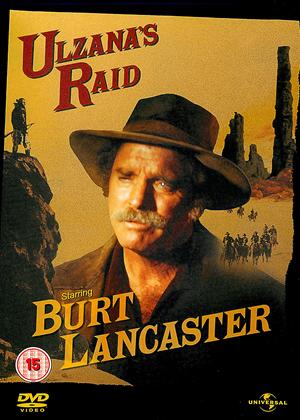 The Good and the Evil - Ulzana's Raid review by DJ

What is good about this film is the beautiful photography, the DoP and editing were truly excellent, as was the sound.  However, it proved to be an abattoir when it came to horses and humans.  As is usually the case with films that are truly graphic, they tend to divert from 'entertainment', simply because they are too damn close to the elbow.  As films go, this is amongst the excellent, but I found it a little too overpowering, because I honestly believed that they killed animals throughout the film.  Am I squeamish,? No, just with principles.  I neither see the slaying of an animal as entertainment, nor do I agree with killing animal in the name of entertainment, because it isn't entertainment.  What was surprising, for me, was the fact that there were some survivors ... amazing.

If you happen to love animals, especially horses and dogs ... and dislike seeing disembowelled human beings, don't watch this film, because you will find it very upsetting.  A bygone era, shocking and best forgotten.

The director, Robert Aldrich, is a master craftsman who has the ability to make you want to hide.

The 1970s was a decade of western revival and there are many great westerns to be found made in this period. Director Robert Aldrich's Ulzana's Raid is arguably one of the best and a fantastic performance from Burt Lancaster as an ageing and cynical army scout. The film is a clear allegory to the Vietnam war and in particular the naivety of the Americans in believing they could easily defeat an indigenous enemy. This is a film ripe for restoration and it's quite bizarre that a good version has not been produced for the modern day market. There were two released versions, one by the director and a subtly different one put together by Lancaster. Most DVD copies contain Aldrich's version but it suffers from roughly done editing especially around some scenes of horses falling where tripwires were used. That said the Aldrich version is the more comprehensive in what is a film now considered to be a mini masterpiece. Set in Arizona, the harsh land being a key element of the plot, and an Apache warrior Ulzana escapes from the reservation with a small band of his braves and heads off on a murder spree. Young, inexperienced army Lieutenant DeBuin (Bruce Davison) is sent with his troops to catch or kill the raiders. He is assisted by MacIntosh (Lancaster) and an Apache tracker (Jorge Luke) but as they come across the horrific results of Ulzana's raids on homesteaders the lines between morality and civilised behaviour become more blurred. There's some grisly scenes of tortured bodies and victims but the film is quite restrained in depicting violence. It's in the themes of depravity caused by hatred that the film excels. It's certainly an important film in the genre and, if you're a western fan, definitely one to seek out.