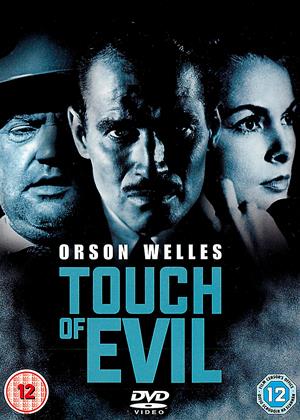 Reviews (3) of Touch of Evil

Touch of Magic. - Touch of Evil review by Steve

Touch of Evil is often adopted as the end of classic era film noir, presumably because it makes an auspicious landmark.  Welles spun pulp fiction into gold yet again. He wrote the quotable Chandleresque script and dominates the frame as the huge, corrupt, infallible cop, Hank Quinlan.

Vargos (Charlton Heston) is a Mexican narcotics agent passing through a US/Mexico border town with his brand new wife (Janet Leigh) when he witnesses the murder of a US construction boss and his showgirl date. Quinlan investigates through his usual unorthodox means as Vargos researches Quinlan, amassing evidence of thirty years of unsafe convictions, usually secured by planting evidence.

Welles relates the complicated narrative fairly well, but this is just a context for his superb visual flair and innate story telling and wit.  The 3m20s uncut opening shot of a bomb being planted in a car at customs and then being driven through the border town is legendary, and still stunning. The conclusion is just as audacious.

The style is expressionistic, yet it still seems gritty with some some splendidly grotesque close-ups. Henry Mancini's wild, cool, percussive jazz score accents the visual art perfectly. The tough, poetic script includes some of the greatest lines in film noir, topped by Marlene Dietrich's nihilistic, immortal final couplet. Heston's was presumably cast because he assured us of his character's integrity, though maybe he wasn't the best fit as a Mexican cop. But Welles is sensational as a freakish mockery of the law, a monster.

If you are an aficionado of the cinema, this period piece will appeal to you.

Non-afionados seeking an evening's entertainment may be less impressed. The story is creaky - what sane man. let alone a capable policeman, would leave a lovely young wife alone in an isolated crummy motel in Mexico, save to dispose of her? It is also formulaic, although it may have been the origin of the formula. And the great Orson Welles as a jaundiced police officer was not a patch on Tommy Lee Jones (No Country For Old Men).

All will appreciate the truly striking Marlene Dietrich. Otherwise not great.

Arguably Orson Welles greatest film, certainly as director and possibly for acting too. A dark, noir thriller that pushed boundaries when it was made and had a controversial release after the studio made cuts that Welles hated. In an impassioned letter he laid out how he thought the film should be shown and in 1998 a restored version was released based on the vision written in this letter. I recommend this version to anyone watching the film today. It's a masterpiece of American cinema and has one of the most odious and malevolent characters ever seen on film in the form of Captain Hank Quinlan, played by Welles himself in heavy make up. It's a tour de force performance and one you'll not easily forget. Set in a small Texas/Mexico border town and a car bomb explodes killing a man and woman. The explosion occurs on the US side of the border but its clear the device was planted on the Mexican side so the investigation is led by famed cop Quinlan assisted by Vargas (Charlton Heston), a Mexican detective who was on his honeymoon and has to look after his lovely wife (Janet Leigh). Quinlan soon has a suspect but when Vargas sees him plant evidence he begins to look into Quinlan's motives and past history. Starting with one of the most famous opening scenes in cinema history, a long tracking shot that culminates in the explosion and creating a tension as the car with the bomb navigates around the open streets and with a plot that was purposely designed to be confusing for the audience this is a film that really drags you in. With it's depictions of drugs, police corruption, perverse sex and violence this was a film that challenged the boundaries of the cinematic art form. It's been a huge influence since (check out 1997s L.A. Confidential as an example) and boasts a fantastic cast including Marlene Dietrich. A film I urge every film fan to see at least once, it maybe challenging to a modern audience but believe me this is an important and quite marvellous film.