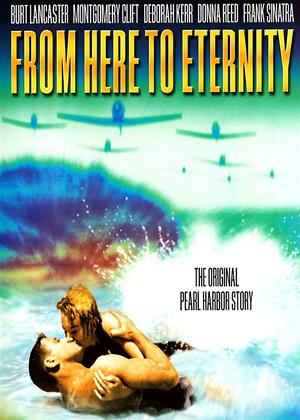 Reviews (1) of From Here to Eternity

A slice of humanity - From Here to Eternity review by JK

The opening scene of square-bashing squaddies didn't bode well as I'm not a fan of American 'WW2' films (and how they, invariably won it). I'm glad, though, I stayed with this film, as, 30 seconds in, the characters began to emerge and what sympathetic, well rounded characters they were.

These were the days when things were 'implied'; We didn't need to see Burt Lancaster and Deborah Kerr having sex in reality - as appears to be graphically necessary nowadays - because we sort of knew what was going to happen anyway so a wave crashing onto the beach gave us the clue we needed. Similarly, the fight scene between Ernest Borgnine and Montgommery Clift didn't rely on mountains of tomato sauce and gut-wrenching horror because, just be seeing a pair of feet twitch we, the viewers, could use our imaginations as to what had happened.

So little is left to the audiences' imagination these days it's no wonder people spend their cinema time stuffing their faces with popcorn and texting their friends!

Although long, this really is a classic film and well worth watching as the storyline is gripping, the acting (especially from a young Frank Sinatra) is superb, the music - both atmospherically and played by various characters is just right for the setting and being in black and white, the photography is superb.