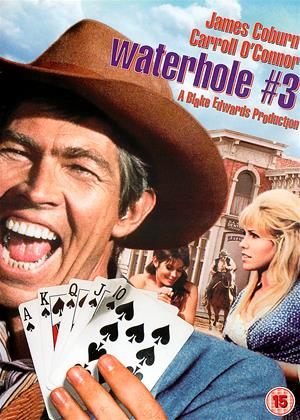 I cannot for the life of me imagine why this is billed as either a "classic comedy" or a "classic western", except that I suppose if they described it as an "incredibly obscure bloody awful comedy western that isn't funny which you've never heard of for a very good reason", it would be rented once in a blue moon on purpose by masochists, rather than reasonably often by people like me accidentally.

Don't get me wrong - I really like good comedies, and I absolutely love good westerns. But this is not a good western on any level, and it would be stretching a point to say it's a comedy at all. It has everything you'd expect from a bad film of this kind, notably extremely intrusive and incredibly annoying "wacky" music that lets you know you're meant to be laughing at scenes devoid of any actual jokes. This film is the worst example I've ever encountered of this particular phenomenon, with the singer not only butting into the action accompanied by irritating banjos and anachronistic electric guitars to loudly tell you things you don't need to know, but resorting to lengthy outbursts of vocal funny noises in a failed attempt to make people riding horses or firing guns in random directions funny.

But what really sinks it is that about three-quarters of the "jokes" revolve around rape, which is first mentioned in the second line of the theme song, and after that it's pretty much non-stop rape jokes until the closing credits. Before I saw this woeful abomination, I thought the most rape-obsessed comedy film in existence was the abysmal "Yellowbeard", but even that desperate misfire does at least derive its tasteless humour from the fact that the rapist is an anti-heroic monster so depraved he simply doesn't grasp that rape, or indeed murder, is a thing you shouldn't do whenever you feel like it. Here, the rapist is the "hero" we're supposed to like, even though he's played by the profoundly creepy James Coburn, and we're reminded over and over and over again that rape is no big deal because women really like it, so long as they're raped by somebody as handsome and lovable as James Coburn. There's even a "joke" in which we're told flat out that no jury would convict any man of raping this woman because it's her own fault for being too attractive!

As for the other jokes, there mostly aren't any, unless you're willing to be amused whenever the musical equivalent of canned laughter tells you to crack up. And since this is a comedy western, therefore (except in one very atypical scene) nobody dies, there's very little you could call action either. It's boring, it's poisonous, and it should be avoided like a sandstone suppository.