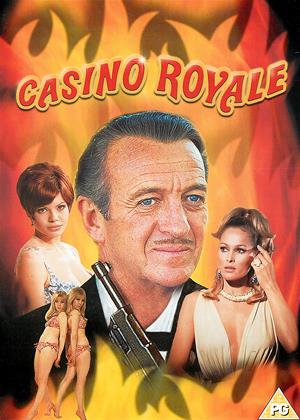 I wonder how many people rented this film thinking it was the one with Daniel Craig, and had trouble getting their heads around what they were seeing? Because this is one of the all-time great cinematic disasters. And not a "Plan 9 From Outer Space" kind of disaster; more like "Exorcist 2 - The Heretic", where lots of people who were supposed to know what they were doing spent a vast amount of money making a sequel which somehow ended up being entirely the wrong film in every imaginable way.

Apparently it started out as a perfectly sensible attempt by another studio to muscle in on the highly lucrative official James Bond franchise, and to explain the absence of Sean Connery, the writers came up with the idea that "James Bond" is a code-name used by whoever Britain's top secret agent happens to be at any given time, so when Connery's 007 goes missing just when he's needed most, one of his predecessors has to be brought out of retirement (the official series very nearly went with that idea; in his sole outing, George Lazenby's Bond makes a reference to "the other fellow"). And somehow the "more than one Bond" concept spiraled out of control, until they ended up with a totally incoherent screwball comedy in which everybody is James Bond, including the women.

Knowing it was all going horribly wrong but not wanting to pull the plug because they'd already spent far too much money, the studio bosses panicked and fired the director in mid-shoot. It's usually a bad sign when a movie has two directors for that reason. This film has six, which I think is a record! The "difficult" (as in "borderline insane") Peter Sellers added to the fun by firing himself. Although top-billed, he's in less than a third of the film, and his final scenes are so confusingly edited that you can see there's a great deal missing, including an entire car-chase. Reportedly Sellers walked off the set because he believed Orson Welles' amateur conjuring tricks were evidence of real magical powers, and he thought Welles was in league with Satan and might put a curse on him. Maybe he had a point, because it's hard to imagine how any film could go quite this wrong without somebody putting a curse on it.

And yet, for that very reason, it's oddly lovable. Due to the multiple directors (and at least ten screenwriters), it lurches all over the place in totally unexpected directions, changing its look, mood, and cast at random intervals - David Niven and Peter Sellers manage to co-star as two men with the same name on the same mission without ever meeting each other. Nothing except the pivotal card-game in any way resembles the source-novel. Instead, we get broad parodies in assorted styles of various aspects of James Bond's popular image, alternating with pastiches of German Expressionist silent cinema, exotic Hindu dance routines, and anything else that seemed like a good idea at the time. The completely-out-of-control last few minutes have to be seen to be believed!

Still, the set designers obviously had a ball - that's the grooviest supervillain's headquarters ever! And since it's 1967, it really is groovy in a non-ironic way. It would make a fun double bill with "Head" starring the Monkees, which has an equally chaotic and surprisingly similar look and feel to it, except that the Monkees were doing it on purpose. Watch out for the cameos by actors from the official Bond franchise, including the late Burt Kwouk. And that's an uncredited Dave "Darth Vader" Prowse playing Frankenstein's Monster.