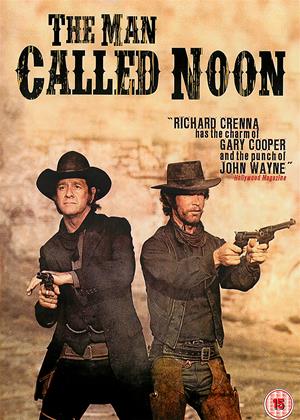 Reviews (1) of The Man Called Noon

Yes, it's yet another obscure movie this rental company describes as a "classic" because they can't say its obscurity is thoroughly deserved or you won't rent it, so they call it a "classic" because lots of genuine classic movies were made quite a while ago and so was this, so maybe it is one, though of course there's a 99% chance it's the exact opposite.

Especially if it's a pseudo-spaghetti western made by a mostly non-Italian cast and crew trying to jump on the bandwagon a couple of years after its wheels fell off. The director is remembered today for "The Italian Job" and not much else. The two B-list stars were well past their prime by 1973, and neither of them looks terribly enthusiastic. The supporting cast are mostly horrendous, and don't even have the usual spaghetti western excuse of being dubbed. The biggest genre name in the credits is Luis Bacalov, the guy you went to for spaghetti western music if Ennio Morricone was too expensive. In places it looks very much as though the film was made purely to use decaying sets left over from previous westerns (you might recognise the fort from "El Condor") before they fell into total ruin. This wasn't quite the very last gasp of the spaghetti genre, but there was precious little life left in it.

The story starts with the hero getting one of those movie head-wounds that make you completely forget who you are, and by the time he at long last finds out, the audience don't care, because in the meantime extraordinarily little has happened. The first proper gunfight occurs exactly halfway through the film, and involves some random nobodies who suddenly come out of nowhere for no good reason, as if the director had just remembered it was supposed to be an action movie. Several people are built up as important characters and constantly talked about, but appear on screen very briefly or not at all. And the hero's backstory, when we finally learn what it is, sounds as though it would have made a far better film than the one we're watching.

It's not so horrible it deserves one star, but it doesn't really merit the two I had to give it because of this site's clumsy rating system. Mainly it just seems tired. The action is as lacklustre as the central performances, and there's very little of it until the final showdown. Long stretches of the film are needlessly murky thanks to day-for-night photography so inept you wonder why they bothered, and even the weather gets into the spirit of things by suddenly turning all damp and dreary, resulting in large amounts of smoke having to be added to subsequent scenes in a doomed attempt to make it look as though they're taking place on the same day. And if you can keep track of the subplot about some bloke who's dead and therefore not in the movie hiding all his money just to give the people who are in the movie a McGuffin to shoot each other over, you're doing better than me!

Spanish locations, extreme close-ups of faces, and more blood than you normally get in a John Wayne movie don't add up to a spaghetti western. It's a pity no-one explained that to Peter Collinson before he tried to make one.