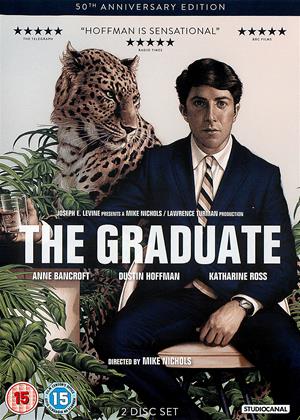 Reviews (3) of The Graduate

I remember seeing 'The Graduate' in the cinema way back in 1968. I enjoyed it, but what I remember most was the introduction it gave me to the music of Simon & Garfunkel.

I've just watched it again after a gap of over 45 years - and I can now appreciate it as one of the classics of 1960s cinema. It tells the tale of new college graduate Ben Braddock (Dustin Hoffman) who returns home for the summer vacation, uncertain of his future.

Up steps an older married woman (Mrs Robinson, played by Anne Bancroft. We never learns Mrs Robinson's first name) who seduces young Ben - leaving him even more uncertain of his future. His unsuspecting parents push Ben into a date with Elaine (Katherine Ross), Mrs Robinson's daughter. Ben falls for her, rousing Mrs Robinson's wrath. Elaine returns to college, Ben pursues her, but Elaine is persuaded by her parents into a hastily arranged marriage with another student. Ben arrives at the church too late to stop the ceremony, but elopes (if that is the right word, since she's already married to another) with Elaine, making good their escape on the rear seat of a bus.

The film is in two clear halves: the first is a comedy of manners, in which an experienced older woman introduces Ben to sex (although given the age of the film, nothing is explicit). The second half of the film is a romance, where Ben (slightly creepily?) stalks Elaine and finally tracks her down.

The film is set in a peaceful, perfect, white, middle class America - a world soon to vanish. None of the troubles soon to come (Vietnam, the civil rights movement etc) are visible. Is it too pretentious to imagine that the final scene is taking the two young people away from their parents' lives towards an uncertain future?

The storyline is somewhat hackneyed, the acting is good (Anne Bancroft is excellent) even though the age of the actors doesn't quite match with the characters, and the film is amusing and enjoyable even after 40 years.