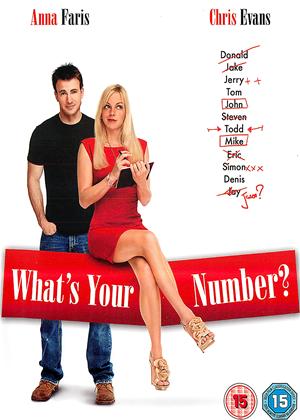 Reviews of What's Your Number?

Ally Darling (Anna Faris) is a thirtysomething who loves to thumb through women’s magazines and finds an article where supposedly, 96 percent of women who have slept with 20 or more men, will never marry. Shocked and afraid for her non-prospects, Ally does what any 21st century woman does – in a very ‘High Fidelity’ style, she tracks down all of her past lovers – 19 of them – to know if there’s a pattern of failure and maybe, just maybe, one of them could be the love of her life.

Ally strings along her hunky neighbor Colin (Chris Evans) during her backtracking activities, and soon enough, she reconnects with her exes and it becomes one hilarious to disastrous encounter to another. ‘What’s Your Number?’ is a romantic comedy, all right, and Anna Faris stars. She tries to be the atypical rom-com heroine. Try being the operative word.

Based on the novel ’20 Times A Lady’ by Karyn Bosnak, ‘What’s Your Number?’ wants to be the anti-romantic comedy. The leading lady is raunchy and foul-mouthed, something that Anna Faris can do, and yet, the storytelling is traditional and stereotypical. What women want is, in the end, still to be married? With the number of exes Ally (Faris) has accumulated, you’d think her priorities are not exactly conventional. But ‘What’s Your Number?’ goes back to being single as the elephant in the room.

When Ally does reunite with her exes, you get a sense that she’s unpredictable and a little too crazy with her choices. Her preference makes her more interesting that she appears to be in the movie, really. The coincidental placement of a clothes-averse and good looking neighbor in Chris Evans also shows the obvious; of course, Ally and he would fall for each other. Sadly, Evans’ character is not exactly Prince Charming (he sleeps around with a different woman every night and he uses Faris’ apartment as a hiding place as he waits for the women to leave his.)

‘What’s Your Number?’ is short on the funny, it is slapstick, and it can get disgusting, but romantic comedy it is not.