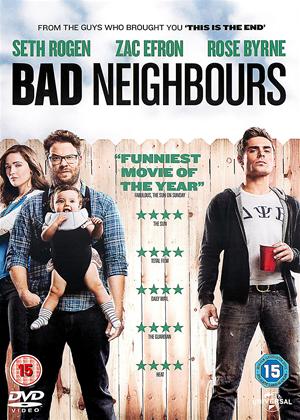 This thinks it's being daring, but it hasn't got anything in its locker. Just crude references and a lot of shouting. No subtlety, and the most unsympathetic, self-absorbed types I've ever seen committed to celluloid. I watched it to the end because I don't want to waste my subscription.

Don't know what the other reviewer was watching, but it wasn't what we saw. This film was so bad we switched it off near the beginning and bagged it up like the poo it was to return. Even our teenagers don't protest! Bad language to no effect through out. Story line.... What story line. Total un-adulterated American middle class garbage.

Well this is sort of ANIMAL HOUSE crude, rude, lewd - the sort of thing kids whose shoe size is close to the age in years will enjoy.

For me - I endured it. It's basically a crude cartoon - a disposable trashy low-bar comedy.

Interest to see Welsh actor Craig Roberts wo starred in SUBMARINE in it though.

Seth Rogen became an A list star thanks to a comedy about becoming a man by facing the threat of impending fatherhood, Neighbours is the follow up to that, a picture designed with the same message in mind but one bogged down in petty actions and pranks that don’t really lead anywhere. Despite this there may be something to be found in Neighbours in its various performers.

Neighbours follows Mac (Rogen) and Kelly (Rose Byrne) and their new family as they raise their newborn baby in a quiet neighbourhood. However when the house next door is bought by a fraternity their lives get a little more complicated as they begin to experience crazy occurrences leading to an all out conflict with the house and its leader Teddy (Zac Efron).

While Rogen and Byrne are set aside in loveless roles devoted to plot and barely any character development the film has a star in Efron who makes what can seem like simplistic material seem like excellent writing. His delivery is excellent and he keeps the film from losing too much of its childish tone despite the main story trying to not so subtly teach you something.

Despite the problems there are elements of Neighbours that keep the laughs flowing, from a great cast of supporting players like Dave Franco as a thoroughly unpleasant yet likable frat boy and a particularly funny cameo by Jason Mantzoukas as an ER doctor makes for more than a few laughs.

However the film never really feels right, its comedy elements get in the way of its dramatic moments, its drama is poor and ill conceived but ultimately this is a funny movie, it has some good comedic moments that are made better by good actors and the whole thing is a lot more surprising than you might think. If anything Neighbours is a sign that The Paperboy wasn’t Efron’s shining moment, he may have more to come.