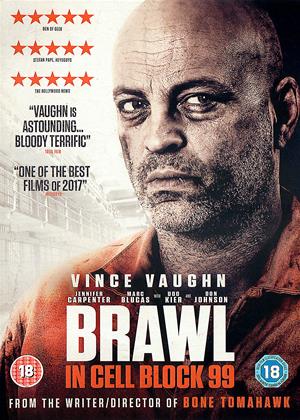 Unpleasant and boring - Brawl in Cell Block 99 review by CS

It's difficult to know where to start other than to say 'don't waste your time'. The script is awful, the acting wooden and the plot

takes too long to get going and revolves around every increasing degrees of sadistic violence. What's more, it is just plain boring.

From the director of bone tomahawk, I new what to expect in the way of over the top violence. Vince Vaughn stars as the lead character who is actually very good in a serious role. For reasons I won’t go into to not spoil the movie is sent to prison which where the violence starts. My only problem with this movie is it does take a long time to get going but when it does it is worth the wait. The story is good and after a while the action and over the top violent scenes are great with some good acting

After enjoying S. Craig Zahler's western opus 'Bone Tomahawk' a year or two ago, I came to 'Brawl In Cell Block 99' with a sense of anticipation and expectation that I would enjoy this follow up. I could not have been more wrong.

First off the acting in this film is terribly wooden. I have enjoyed the work of Vince Vaughan in the past (especially in the late 90's classic 'Swingers') but in this film he seems to have decided that mumbling his way through every scene will suddenly transform himself into Marlon Brando. The supporting cast are equally dull and uninteresting with no one character standing out.

The sound is also poor.

The fight scenes are laughable in places and Zahler just seems to have decided to cover everything over with excessive violence, which unfortunately for him doesn't work to hide this train wreck of a film.

This is a prison movie unlike any other! Vaughn is excellent and really holds his own in what is at times an extremely hard hitting, brutally violent movie. The story takes interesting twists and turns too and never slows down. This is easy one to recommend for fans of the genre.

Vaughn recreates the role of Lurch in this sub grind house movie,head stomping violence,laughable dialogue,plot holes the size of Texas,over two hours of my life wasted.

Vince Vaughn, Jennifer Carpenter and Don Johnson... why opt to star in a film with a script as wooden as a pencil?? Violence is over the top and plot about as weak as possible.

All three of the above actor's have the capability to star in far superior title's so can only hazard a guess that the pay cheque was the only reason for signing up for such drivel.

Watch if you wish but do not set your sights too high with this film, very disappointing..

For a far superior prison drama that came out recently check out Shot Caller, a truly excellent film with a script that's as tight as a snare drum.

Good if you like bad. - Brawl in Cell Block 99 review by DC

After 15 minutes I thought this was sci-fi with the main character actually being a robot. I was wrong, it's just his acting is so stiff. The plot is terrible, the fighting sequences are like Laurel and Hardy. The violence is over the top, more like a horror film. The blackmail threat is one of the most disgusting things I've ever heard of. Anyhow, I watched the whole thing because sometimes its good to watch something so bad. Really this is a comedy-horror.

Vince can do this, but not in this film. The violence is not necessary. Roadrunner gone mental. Laurence Olivier with Dustin in his dentist chair in Marathon Man was way more threatening, and just stood there with a small tooth prong in his old hand.

Disappointing considering the directors previous film the excellent Bone Tomahawk. Vince Vaughn is very good but there’s not enough back story or depth to excuse the gratuitous violence. Lots of style especially at the beginning, and some hip dialogue but ultimately who cares

Not sure why this ended on my list but would not recommend. So slow and the acting is poor. Fight scenes are budget movie with embarrassing gore and blood. Don’t waste your time.

Vince Vaughn ventures far outside his comfort zone for Brawl in Cell Block 99. Way outside, as though he were visiting another planet. We’ve become so accustomed to him in mid-tier comedies that it’s a shock to see him in a brutal action film that goes the extra mile for the most gruesome of violence. But it’s all the more intriguing that once the shock of blood and guts wears off, Vaughn’s performance is genuinely stellar past being so surprising.

He plays former boxer/drug mule, Bradley Thomas, desperately trying to get his life together. After losing his auto-repair job and coming home to find his wife is cheating on him, this would seem like the point where he loses it. But he remains calm enough to take the violence out on his car and not his wife. After some bloody knuckles and car parts strewn on the lawn, he aims to fix his marriage calmly. This, unfortunately, means going back to being a drug mule. At first, it works. They have a better house and a kid on the way.

But one bad deal with some untrustworthy people leads to Bradley ending up in prison. Bradley aims to serve out his sentence calmly, but some unsavory gangsters won’t let him go so easily. If Bradley wants to keep his wife and children safe, he must be the baddest dude in the cell block to make it to a high-security prison and assassinate one of the most locked-up inmates.

And that’s all the plot you need as the rest of the film features Vaughn battling his way through prison, beating up guards and savagely brutalizing other prisoners. In the tradition of classic exploitation films, the violence is relentless. No broken bone, slashed chest, or crushed-in skull doesn’t carry a gritty bite. It’s an unapologetically vicious film that nearly replicates the same over-the-top gore of The Story of Ricky. The only thing holding it back from such levels is a ridiculous scene involving intestines being used to choke somebody. But it certainly comes close with a rather grizzly scene of Vaughn kicking someone’s face into the pavement and dragging it across with his foot.

The movie doesn’t try anything more than earnest grindhouse affair. There’s no deeper backstory to Bradley and Vaughn plays this characters perfectly in an understated manner. There’s rage inside him that he quietly denies, keeping it bottled for someone who truly deserves it. I love how this side of him only comes out in moments when he shields himself from chaos and quickly retreats when not needed. When he blows off steam in the yard, he comes inside a different man. When he senses a drug deal going south, he makes the tough call and turns himself in, silently and without emotion or resistance. He doesn’t need to grit his teeth for this role. Everyone else is already doing so as he snaps their limbs and rips out arteries.

To call this film an excuse for violence is not wrong, but what more can you expect from a film like Brawl in Cell Block 99. It promises exactly what one would expect; a bloody and gory battle of one man trying to the right thing outside by doing the wrong thing inside. It sure beats the plot of gangsters holding Bradley’s wife which becomes a little more farfetched as it progresses. It’s just more fun to watch Vaughn play a violent prisoner who squares off against tough inmates and a warden played by Don Johnson. There’s something so darkly amusing about such a premise. I admired the film from this aspect, but with a warning for violence that turns the picture more horror than action.