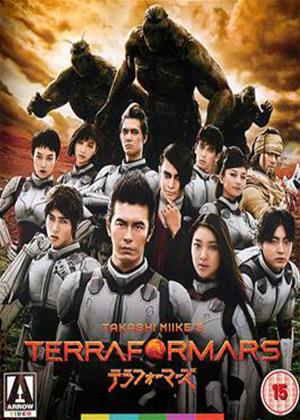 Not your usual Sci-Fi fair, mind you if you've seen any of director Takashi Miikes' other films that shouldn't surprise you. He is known for his graphic horror such as Audition, Ichi the Killer and the complete madness that is Visitor Q. But he has also done family superhero with Zebraman, a musical The Happiness of the Katakuris and the epic action of 13 Assassin's and Blade of the Immortal amongst a whole host of other stuff, if you haven't already, go and check some of this stuff out.

Anyway back to Terra Formars, it's certainly not a Sci-Fi masterpiece but it's is very entertaining and probably not what you would expect

So in the future earth is over crowded so let's make Mars habitable for humans. Some stuff is done to start it off and then some folks are sent to see how is going and tidy the place up a bit, but oh dear something weird has happened. Here comes some epic/bizarre/really unexpected fighting scenes and just general madness that is funny, violent and justs nuts!!

Well worth a watch if you just want some entertaining nonsense.