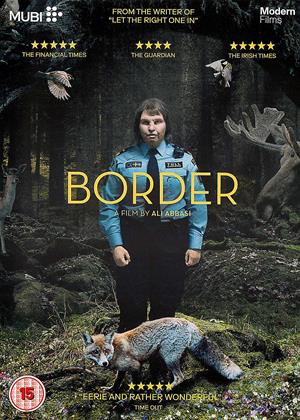 Vampires, zombies and aliens all produce films about alienation and the human condition. Scandinavia has it's own genre which produces either horror or comedy. This was quite unlike anything I've ever seen. Tina has a strange chromosomal disorder which also gives her extraordinary olfactory powers to sniff out guilt, shame and evil. But what is the nature of this disorder? And what happens when she meets somebody who seems to share it? Something lurking in Scandinavian folklore allows a fascinating film to develop about alienation and morality. I cannot recommend highly enough. One of the best films I've seen in a long time.

If you are looking for something a little off-beat, far away from formulaic Hollywood, you might go for this. Tina is a customs officer who has a talent for literally sniffing out suspects. She encounters a strange person who leads her onto a road to discovery about her true self. Looking like something out of a Roald Dahl book, Tina used to think of herself as a misfit, but a subplot reveals that there are other "monsters" in society of a different sort. It might not be to everyone's taste, but you'll be rewarded if you want a break from the familiar and predictable.

A weird film but worth a watch - Border review by FP

Definitely not my normal type of film but my boyfriend wanted to watch it, so I watched it with him. A weird film, different and I got involved in it wanting to know what was going to happen next! I wouldn't watch it again mind, but worth a watch. Good ending as well.

I had no idea what to expect from this film. None. I thought it may be the usual tedious Scandinavian smuggery. Slow movies which go nowhere about relationships.

How wrong I was! This is a\bout relationships but oh so much more.

Oddly it is utterly believable. And wonderfully specific to Scandinavian traditions and myths.

The specific crime ring plotline may be a tad unbelievable BUT the writing, set-up, sheer skill at establishing character and place that has happened before means we can suspend our disbelief for that too.

I LOVED this film. Just brilliant. Better than anything I have seen from Hollywood for years. If I could I'd give it the Oscar.

Imagine the BBC Film Unit making this - the demand for authentic casting and the shoehorning of black characters and racism issues in the plot. Thankfully, there is none of that. None. WHAT A BREATH OF FRESH AIR.

5 stars and then some - this is a brilliant movie. SO good. Intelligent, thoughtful, genuine, BRILLIANT!

Such a mixture of Unlikely yet Connected Horrors .

Not Exactly a Horror Movie ,But in a Deeply Strange Way, Very Horrific .

Well Worth Watching ,I Highly Recommend it if you like the Unusual .

Why was this made? - Border review by HH

* SPOILER ALERT *What a deeply unpleasant film this is. Perhaps it means more to the Scandanavians, but it made no sense to me. Even the main character, Tina, is unpleasant, throwing out her "partner" without warning, and as for her new partner - paedophilia whatever it's practised on is still revolting. He seems to think it's justifiable as a form of revenge on the human race.

The sex scene was hilarious and unpleasant at the same time.

Also who sent her the baby at the end of the film? Her partner drowned?!

Awful, wouldn't recommend to anyone.

Way south of the Border in terms of disturbing. - Border review by rhilton311

OK sorry about the very poor pun. When watching foreign language (by which I mean non English) films I am often thinking what would the result be if Hollywood remade this film. And often you just know that they would miss many of the nuances of the original as the result would not be nearly as good as the original. Not their fault necessarily.

Just occasionally I watch a foreign language (by which I mean etc. etc.) film and realize that no Hollywood executive would touch the film with a barge pole. This is one of those films. Think the love child of a detective thriller crossed with Pans Labyrinth and, spoiler alert, there is a love child involved. Sort of.

It starts as a very dark thriller and veers into a very disturbing love story that will very likely challenge your standard ideas of love and affection. At the end , whatever your opinion of the film I think you will be hard pressed to argue that that this is a film Hollywood will be lining up to remake and all the better for that. Hopefully , like me, you will agree it is an original and one you won't forget for a long while.

a great film, not what i was expecting but thoroughly enjoyed it, though a bit disturbing in places. a mystery with a folk take twist

This is a very original and clever script which keeps you in suspense. Very good actors. For us, well worth seeing.

Slow to build but rewarding - Border review by HM

A lady customs officer who looks like a Neanderthal can sense and smell peoples emotions and actions. She bumps into a man who looks just like her. A relationship develops and she finds out more about herself and works with police to locate paedeophiles but revelations turn in darker directions.

A movie that passes thorough love, revelation, intrigue, police thriller and ultimatley fairy tale horror. Brothers Grimm could have written this for adults to enjoy and be oppressed by as it becomes a hard watch at times. It will leave an impression on viewers.