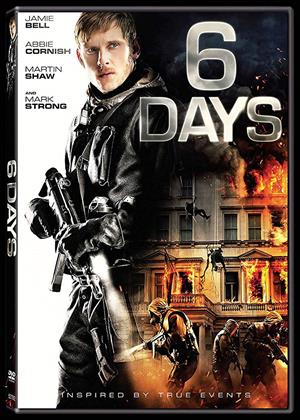 Sign up
Arn: The Kingdom at the End of the Road

6 Days is the kind of true-story thriller made by someone aiming the most for accuracy with the source material. For the person who often scrutinizes over details and gets flustered when films miss their mark in portraying this reality, this film seems to favor making sure the reenactment is done just right. Sadly, a few details are messed up here and there so even kowtowing to that perspective is not fully on target. And with the accuracy slightly askew, what we’re left with is an action thriller that spends more time working for that astute accolade than ever being more compelling.

It is August of 1980 and the Iranian Embassy in London has been stormed by six Iranian Arab terrorists. With 26 hostages inside, a team of SAS operatives is assembled to resolve the situation. They face a situation where the terrorist leader demands 91 Arab prisoners in Iran to be released or the hostages will die. Quite the tense situation, considering it goes on for as many days as the title implies.

Throughout those six days, we follow three different viewpoints: Lance Corporal Rusty Firmin, BBC reporter Kate Adie, and Chief Inspector Max Vernon of the Metropolitan Police. We watch how they react and handle the delicate situation, going through the routine procedures and considering all the possibilities. Director Toa Fraser tries to keep all of this on-point, sticking to procedures and actions more than making this true-story take flight off the screen. It’s a fool’s errand considering this mindset still messes up a few names and gets the wrong weapons for the scenes.

6 Days is a very frustrating film in that it presents a volatile situation of Arab terrorists and mostly keeps out any greater focus on the reasoning for the hostage situation. In other words, it presents a political situation without addressing much of politics. It’s a strictly business thriller. In some ways, this is a smart call. A lot of these intense thrillers usually showcased through the perspective of the heroic white protagonists generally stumble hard when it comes to noting Middle East activism. At their worst, they thrust themselves into Islamaphobia, as in the deeply misfiring London Has Fallen where the hero tells the villain to go back to Whatever-F**k-istan.

This film never goes after amping up the terrorists on its surface but in treating the situation more as just a task seems to rob something more from this story. What it instead weaves from these events is a perspective more akin to a video game. I can recall one commenter remarked that he enjoyed the tension of the film and that it made him want to play a Tom Clancy game. And this is very much a Tom Clancy style movie, more attune to taking interest in how to handle a hostage situation than remark on why there was a hostage situation to begin with.

I know it’s not in this film’s place to take such a stance but it does bring into question why we needed such a film to begin with. It’s competent, sure, and features some decent performances from a cast that includes Jamie Bell, Abbie Cornish, Mark Strong, and Martin Shaw. Yet I can’t help but shake that such an important piece of history shouldn’t be relegated to this B-movie style meant more for thriller junkies. Maybe this kind of script didn’t need that real-world link. Maybe it just needed a Tom Clancy slather of fiction.