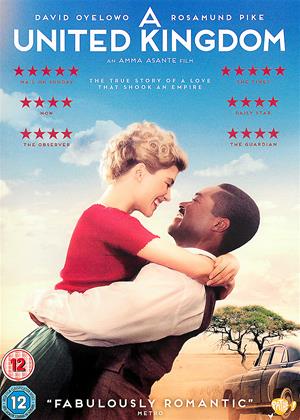 Reviews (5) of A United Kingdom

I am getting totally sick and tired of films like this, and most TV drama come to that, which want to rewrite history, cast white Brits of the Empire as somehow evil baddies, and all black people as angels - THAT is utterly racist, of course, and also promotes lies as history.

ALL the white Brits in this odious state-funded film are pantomime baddies - they do everything but twirl their moustaches here. Now THAT is racism, just like how white Brits are portrayed as racist stereotypes in all those dire racist silly Bollywood dance movies.

Most of the British empire was good - though of its time - and it gave far more than it took and was largely supported by loyal members of the empire in Asia and Africa too - though no-one admits that now. The largest peacetime army of 2.5 million was raised in Raj India in WWII. Never more than 50,000 Brit soldiers in India during empire.

Africa these days is so corrupt and mostly full of failed states poorer than 50-60 years ago despite the trillions of aid they have been given and which the elite steal. Under the British, there was rule of law, stability, and lack of corruption.

Maybe make some films about the empires of African and Asian states - the ones that enslaved people, traded slaves, were all powerful dictatorships - because it is SO wrong that the MOST benevolent empire in history, the British empire, which civilised the world and banned slavery AND sacrificed so much to enforce that ban is now portrayed as the baddie, whilst corrupt African kings are somehow always-good angels. It is FAKE NEWS basically and LIE-HISTORY - as seen on the shameful Dr Who Brit-bashing episodes from India - all aimed I presume to make people hate Britain.

This is a story I was not aware of and read up afterwards, which is always a good indication that it got me interested. The acting throughout is of a very high standard, especially the dependable David Oyelowo. The problem is that it had Sunday afternoon feel about it, a film that could have been made in the seventies with it's it two-dimensional characters. I felt it could do so much more, I watched this shortly after watching 'Loving' and this shows how it could have been done.

Interesting Bio Pic of the romance and marriage of Seretse Khama and Ruth Williams in the early 1950's when a mixed race marriage was not the norm it is today. Added to story is the politics of the time and the Apartheid stance being taken in South Africa added to the possible wealth of minerals that could be untapped in Botswana and the machinations of the British Government.

Very well acted by David Oyelowo and Rosamund Pike as the Khama's and an excellent cast of British actors. I enjoyed this film and recommend it.

I know several people who loved this film. For me, it was a worthy but rather predictable film that was mainly of interest for the Botswana background rather than the characters. I really tried to like it and stick with it, but unfortunately it did not capture my whole interest - well worth a watch though if you like good acting and a positive story.

Should have been better - A United Kingdom review by KD

An interesting story and like other reviewers I then went and read up about the real-life couple, but I felt that there was zero chemistry between the main actors. I was really looking forward to this film and felt very disappointed by it.