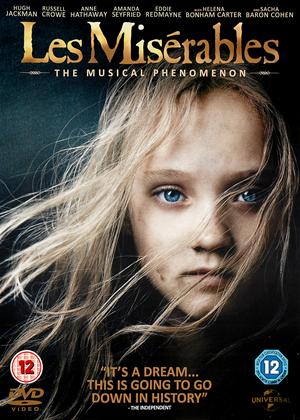 Heavy going at times, but with good acting and special effects, especially the first scene. The singing from actors like Russell Crowe is not as good as the stage version which has singers who can act. Some people cry and at some of the scenes, worth viewing if you like musical films.

As a long standing lover of the on stage musical I was fortunate enough to see both a live performance and the cinematic version of this, one of my favourite musicals, within only a few weeks of one another and, despite all the hype surrounding the filmic version I must say I was distinctly under whelmed.

For those who have been living under a rock-opera rock for the last twenty five years Les Miserables is a popular musical interpretation of a moving Victor Hugo novel in which a man attempts to justify his freedom during the turbulence and bloodshed of the French Revolution.

Where some of the vocal talents on display in the stage version were utterly mind blowing there were several in the on screen version that left me very much wanting – most notably I could not contain my surprise at the casting choice of Anne Hathaway as Fantine, whose desperation and suffering ought to have been sharp as knives in the final musical moments of her life but were in fact considerably lacking in power and emotion – turning Fantine into a rather useless and pitiful character, rather than the rather romantic lost soul she was always intended to be.

Yet, the press at the time of the film’s cinematic release were filled with discussions of the vocal talents of Russell Crowe, an actor who is far from known for his musical abilities; I was pleasantly surprised by how affectively he portrayed his role, singing and all.

The stealers of the show were of course Hugh Jackman, whose starring performance was always bound to catch attention. But even more than this, despite the relatively small size of her role, I was absolutely captivated by Samantha Barks, who plays the beautiful but doomed Eponine, whose unrequited love leads her into the line of fire on the French Revolutionary front. Utterly unrecognisable from the eager young woman who first appeared on screen in the BBC’s search for a Nancy in the West End revival of Oliver! Barks’ performance was both heartfelt and heartbreaking, capturing the turmoil of her character perfectly.

As one who is very familiar with the story it is very hard not to make comparisons between the various portrayals of some of my favourite characters, and yet I believe that even without the fore knowledge of the stage show and the singularly infamous performance of Colm Wilkinson ingrained in my memory I honestly believe I would have still left Tom Hooper’s version feeling somewhat cheated, knowing that hiding somewhere in the grey and rather uninspiring 158 minutes was a story known for its beauty, pain and strength.