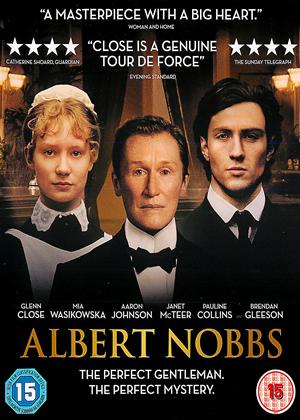 This is an interesting film well worth watching. It was a bit spoilt for me by the fact I knew the story and also that the women-dressed-as-men really do still look like women - albeit manly women or lesbians, but still very much female - so the suspension of disbelief is tested.

But this film really falls down when it starts to become a sort of campaign for women's rights or lesbian rights, instead of telling a story: it seems at time like propaganda, a manifesto, a polemical appeal for gay rights and women's rights. For example, EVERY single male character in this movie is a 'bad guy' - even the kindly doctor is a drunk - and all the men here are useless at best, bastards at worse, and treat women badly and run away from their responsibilities. One wonders if Glenn Close would be uncritical of a movie that did the equal and opposite and stereotyped all women as child beaters and devious sleeparounds to blame for all bad in the world?

Using modern standards to criticise the thinking and behaviour of others who lived in the past is wrong and silly - but it is the basis of much politically correct and revisionist thinking (and most university history courses too, it seems!)

Having said that, the film is based on a short story by a well-known Irish writer who no doubt witnessed a lot of drunken boorish oirishness and abuse of women by macho countrymen, so if this is faithful to the story then one has to blame the novellist and not the screenwriter!

But really, if black people were portrayed as men are in this, then that film would be banned.

Apart from that, it's still enjoyable - though the sets do not look nearly dirty and poverty-stricken enough, and pretty boy Aaron as an illiterate drunken waster is arguably miscast. Really it's juts a love story and a melodrama - but really sexuality or gender would not be the most important problem faced back then: poverty would be. The identity politics of the 60s onwards which put race and gender and sexuality above all else are on display in Albert Nobbs.

So really, an average 2.5-3 star rating. Worth watching as a curiosity piece.

I found this to be a very powerful film that explores and examines sexual oppression, exploitation and gender equality in an era dominated by convention and patriarchy. I was moved as I watched the layers become unravelled and marvelled in some of the performances which to some degree were very stylistic. I was particularly struck by Janet McTeer who played the role of Mr. Page. Five stars from me - an interesting and thoughtful film.

This film is somewhat unexpected in plot and content. It throws up some interesting social issues that apparently might have pertained to Ireland in the last century or so. Glen Close was very good in the role as were the others although perhaps they would be slightly stereotypical. I nonetheless enjoyed it and would recommend it for something slight different.

Academy Award-nominated actress Glenn Close plays the titular character in ‘Albert Nobbs’ about an astute butler in a Dublin hotel – who happens to have a secret. See, Albert Nobbs is actually a woman living the life of a man! This is a passion project for Glenn Close, who played Albert Nobbs on stage 30 years ago, and has been working to turn it into a film since then. As Albert, Close manages to be a human amalgamation of all the forces of strong emotions bereft of a woman disguised as a man in turn-of-the-century Ireland. ‘Albert Nobbs’ is a film about danger, only they’re in period and ornate wardrobe.

Directed by Rodrigo Garcia (‘Nine Lives’) and based on the short story ‘The Singular Life of Albert Nobbs’ by George Moore, ‘Albert Nobbs’ is a character study filled with inner soliloquy and social commentary on how women are allowed (or not) to make the right choices for themselves, however society dictates that they’re all wrong. We know Albert becomes a man because at least he will exist; what are women if not second-class citizens only propositioned to become wives to take care of men’s affairs, keep them company, and bear them children.

Even Albert knows that’s what a man should do, and he does by wooing the hotel chambermaid (Mia Wasikowska). Their courtship seems to be over the moment it has begun; Albert will have to reveal to her at some point she’s really a woman and besides, the young girl is head over heels over a man (Aaron Johnson) who promises to take her to America.

‘Albert Nobbs’ elicits fine performances from Glenn Close and her fellow woman-in-manly-drag actress Janet McTeer, who plays Hubert Page, a woman living as a married man! Together, they make an unexpected odd couple with McTeer’s Hubert as Albert’s inevitable mentor. But for Hubert, being a man is not merely to hide – it’s his choice.

For Albert, it’s an economic decision, one that will transcend his being. The film may not be as exciting but it’s saved by Close and McTeer’s nuanced and sheer performances.