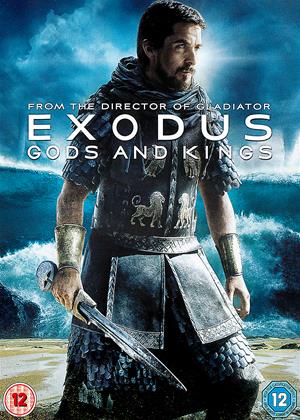 Reviews (6) of Exodus: Gods and Kings

I remember with a certain fondness the biblical epics of the 1950s and 1960s and I looked forward to Ridley Scott's film, thinking that with his pedigree he would be able to deliver something new.

Has he delivered? Well, there is good use of modern CG FX to depict the plagues and assorted other effects, but that's about it. Frankly, the film is just not very interesting and no amount of re-writing the timeline of known historical events (eg the building of the pyramids), let alone re-imagining (I think that's probably the right term - the polite term) the biblical tale of the Jews in Egypt and the relationship between Moses and Rameses can make it exciting.

I won't go into the argument that it ought to be based on the bible story - it's a movie drama, so licence is expected, and the film departs some way from the biblical text.

I am however worried about one thing: why are the central characters, indeed most of the cast, so white? The inhabitants of ancient Egypt were not Caucasian, Christian Bale is a Brit, Joel Edgerton is an Aussie. Colour me puzzled...

No, I found it disappointing and distinctly average, but frankly I didn't enjoy it so I'll give it 2/5 stars. That does seem a bit mean, but at least it's better than the dreadful 'Noah'.

Too much ambition not enough talent - Exodus: Gods and Kings review by TJ

To paraphrase this movies ambition outweighs it's directors talent. Ridley Scott hasn't made a really good film in years... and years and this is yet another one of his big budget... big stars (spot the cameos)... flop.

An ok film - Exodus: Gods and Kings review by gazmb

I enjoyed this film , it's one I would only watch once though. Story and detail could of been stronger, good special effects.

Outdated, Outmoded and simply why bother? - Exodus: Gods and Kings review by CS

What to say about a film which tries so desperately hard to reproduce the grandeur of 50's & 60's Biblical Epics, but fails so miserably! Everyone else on here seems to have said it already, this feels like they are trying to do a modern take on the Biblical Story by injecting lots of modern scientific explanations into the script, such as the theories of tidal waves or rising sea levels, the effects of famine, disease and so on. It is generally acknowledged by most that religious texts are nothing more than myth, legend, how people explained natural events in the past, but this film tries so hard to follow the mythical biblical story, whilst bringing the ideas up to date, that I can't workout if the directors making fun of science, or religion itself? God shown in the form of a young boy simply comes across as an arrogant child having tantrums and unleashing horror upon the world as a result. As Pharaoh says, "What God kills all the Children?", to which Moses replies, "No Hebrew Children Died"! For me this says it all, this is a story of cruelty, barbarism and persecution, committed by the Hebrew God against the Egyptians, whether this twist is intentional or not I'm unsure? The promised land of Canaan is mentioned and someone points out that it is already inhabited, what they don't mention is that in the Old Testament, the Hebrews commit genocide and wipe out the Caananites, in order to steal this promised land! There are so many obvious plot holes, continuity errors and simple mistakes, such as when the Red Sea drains, there is not a bit of seaweed, dead fish or any other form of aquatic life, just sand and a few rocks. They climb out onto a hill next to the sea, but next shot shows them all basking on a golden sandy beach and when the sea starts to drain, it's so obvious that they are all standing in a river flowing one way! At nearly three hours in length, I found this a very long, drawn out affair, slow to develop, an awful script, lots of historical errors, standing next to the Sphinx for example with no pyramids or builders village nearby, which exist right next to it in reality, but seem to have disappeared for this film. We know today that the myth of slavery in Egypt was probably just that to an extent and that lots of the builders were actually paid artisans, so it's difficult to carry such an old fashioned concept nowadays with what we actually know, compared to the myth, so perhaps you are going to make a film based upon Myth, it should be just that, because in this case the two simply don't mix!

This movie is a bit long and perhaps too reliant on CGI - the list of hundreds of names of digital artists at the end are a sign of just how much of this is create in a computer.

All in all, it's a bigged up version of the bible, which takes liberties and dramatic licence, but why not (the old testament is hardly a documentary!).

There are some fun parts - and in the tale of friends/brothers who fall out it aims to mirror Gladiator and Ben Hur etc I suppose.

The plagues are done well - you can have fun trying to guess what's next.

Most stupid scenes involve the pharaoh's advisor trying to explain the plagues by logic. For some reason, he has a strong Scottish accent! The other accents used are neutral, maybe mid-Atlantic. So why the SNP accent half-way through? Very odd. I was glad when he met his fate...

I do not have an issue with the race of the actors - ancient Egypt, after all, was populated by north Africans (not those with negroid features). The pharaohs were NOT black like Kanye West, no matter what certain race consciousness groups in the USA claim.

So all in all, worth a watch. But not a patch on Gladiator.

Exodus: Gods and Kings is a movie that finds itself all over the map. It wants to relate to the grand biblical epics of yore, but wants to modernize its fantastical elements into a grounded environment. It wants to showcase a top-notch cast, but doesn’t want them to have any breakout performances. It wants to be a visual treat with an abundance of CGI effects worthy of a disaster picture, but also doesn’t want to overplay them too much. Whatever Scott’s true intentions were for this project, it becomes lost in a dizzyingly dull and sporadic spectacle.

It’s your standard story of Moses and Pharaoh Rameses played by Christian Bale and Joel Edgerton respectively. Giving his most bland performance yet, Bale plays a rather uninspired Moses who leads the Hebrew slaves to freedom. Edgerton’s Rameses predictably sneers and scratches his bald head in frustration as his empire is threatened by biblical forces. Frogs descend from the skies, locusts terrorize the land and the firstborns all mysteriously die as a dark shadow of death consumes the empire.

Scott seems to have focused most of his energy in this project to the visual aspect. He probably took a look back on such films as The 10 Commandments and King of Kings and thought “I could make that grander.” Busting out all the computer graphics, epic scale sets and decadent costumes his production team could muster, it appears as though Scott was setting his sight on creating a beefed up biblical epic for the 21st century. While he more or less achieves that visual desire, he pulls a George Lucas in how he favors style over substance.

The characters feel mostly detached from a script bogged down in theatrics. Christian Bale seems to be entirely phoning this performance in. Whether Ridley Scott was aiming to make him more subtle or not, Bale’s heart doesn’t seem to be in this one. Nor does Edgerton who pulls back as a villain. He appears to be taking this role too seriously for a man with eyeliner and gold clothing. The rest of the cast that includes Ben Kingsley, Sigourney Weaver and Aaron Paul are completely wasted with what little they have to do. I can’t recall any of Paul’s dialogue as he spends the majority of the picture just scowling.

In his attempt to inject some originality, Scott employs some creative story changes. God appears talking to Moses in the form of a small British boy (makes sense given his toying nature with human lives). The iconic parting of the Red Sea is more of a draining as the slaves cross when the levels are just low enough. These elements sound a little silly on paper as if Scott is trying to make the acts of God more reasonable for reality, but you’ll be begging for any innovation in the way the picture mostly strolls down a familiar path.

Ridley Scott’s religious epic is the a-typical blockbuster gloss for a biblical epic that sheers any emotion or thrill. The grandeur of the scale gives way to any ounce of character development with actors drearily sleepwalking through such quiet roles, doing their best not to get in the way of the visual effects. Even on the level of transforming this religious tale into a computer-generated thrill ride of plagues, there’s a lacking element of humanity in making us care about what is happening on screen. It should be exciting watching a community shredded by God’s wrath, but these sequences feel so distant from the story. The result is a bloated bit of religious action that never really capitalizes on anything and is ultimately an empty experience devoid of life. Exodus is not quite a sin of the genre, but it needs a few good lashing to wake it up from the dreariness.