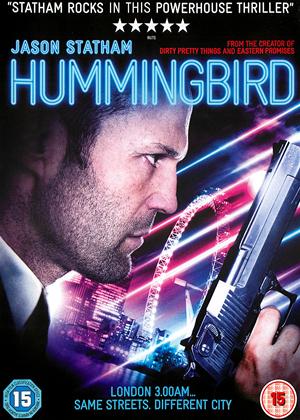 Hummingbird (2013) - "worth a look" - Hummingbird review by CP Customer

If you are a Jason Statham fan don't e expecting the usual 'couple of words when I speak' Statham. In this flick he acts as much as he fights. Centering around a man with his own demons who drags himself out of the gutter, first to meet his own needs, then to do good by others, righting wrongs and finishing up.............well you will need to watch the movie to find that out.

In this movie Statham shows he can actually act as well as fight and this movie is a fine example of him doing both.

No idea who would enjoy this film - Hummingbird review by JH

The film is unfortunately let down by cliched directing and a poor script. Can understand why the filmmakers would have wanted to get interesting and talented actors to hold the story and our attention. Unfortunately they ended up with Jason Statham and some other charisma-free zones.

If you like watching an hour and a half of a boiled ham in a suit, looking blank while it repeatedly swigs from a bottle of vodka, then maybe this is the film for you.

I mean, I'm not a fan of bone-crunching violence but even I was desperately wishing for more of that, just so that I would be able to remember something that had happened in the 90mins of my life that I'll never get back.

Finding a good Jason Statham film is like looking for a needle in a haystack, it doesn’t help that he seems to shoehorn himself into the same role over and over again, essentially type casting himself as the tough guy with a heart for any low budget actioner looking for a lead (see Safe, The Transporter series and this years Parker).

That being said, Redemption finds him walking the same line as the aforementioned titles but director Steven Knight adds personality to this tale of vengeance and forgiveness as Redemption follows Joey Smith (Statham) as he walks the streets of an unknown city hiding from his past, one that gives him nightmares. However when he meets a kind nun named Cristina (Agata Buzek) he finds reason to reverse his downward spiral.

Unlike any of his other performances, Statham is fantastic as downed hero Joey, a man destroying himself for past misdeeds, actions so heinous he deserves to be punish. Knight pushes Joey through the ringer and Statham delivers thanks to a wonderful script full of ambiguity and debate about morality and how much bad you can do and still be considered good.

Buzek compliments proceedings as a woman forced into her position of piety due to her past, a woman whose choices were stripped from her, pushed to seek the same things as Joey, forgiveness for past transgressions, ones that proved to be outside of her control. A moving look at self loathing and punishment.

Redemption looks behind the curtain of big city living and the dirty secrets you find there from human trafficking to prostitution as it speaks for the everyman, the downtrodden and the beaten as Joey does his best to make a dent despite the many demons that haunt him. Clever, with a clear vision, Redemption is the film Statham was waiting for and one that is well worth your time. 4/5