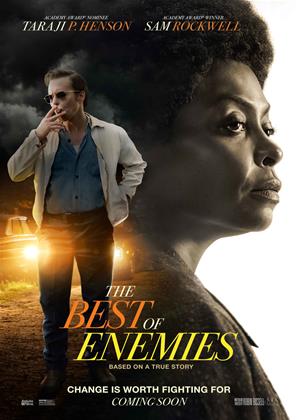 Not released
Forever My Girl

Not released
Dirt Road to Lafayette

Reviews (1) of The Best of Enemies

This is an important subject and is very timely told at a time when racism, segregation and hatred Is probably at it most accepted since the time this story is set. The message here despite what cinema paradiso’s in house reviewer says is clear and there is no question that right rules over wrong here and that the main characters are a beacon for hope. Yes, you could argue the main parts are underwritten particularly given the run time and yes, I am sure some poetic licenses had been taken. I can think that only people who were disappointed with the outcome in this film would give this one star Mr Macpherson. For those reading the review from this critic, I would say read all the other critic reviews, with hardly any others giving this film such a scathing review.

The Best of Enemies review by Mark McPherson - Cinema Paradiso

Similar to the likes of 2018’s Death Wish, The Best of Enemies is the wrong film at the wrong time. Not long after Green Book became an awards darling, a deeper questioning of the white savior movie trope was held under a harsher microscope. This goes double after Green Book won the Academy Award for Best Picture and Seth Meyer performed a skit on his late-night talk show that perfectly satirized every trope of this familiar story. After all that, The Best of Enemies ends up being more of a bitter reminder of the problems with these pictures rather than be the feel-good true story it was intended to be. For a film that wants to showcase how far we’ve come with racism, it’s surprisingly backward.

The clashing of minds on racism is that of civil rights activist Ann Atwater (Taraji P. Henson) and Ku Klux Klan leader C. P. Ellis (Sam Rockwell). Both of them battle each other during the 1960s in Durham, North Carolina. But by 1971, a desegregation decree for schools brings the two together. Eventually, after many meetings, the two would become great friends over time. While this is all true, the way the film goes about weaving such a story in a manner that both adheres to the white savior formula and downgrades any meaningful examination.

Take for example how the film depicts Ann Atwater. We don’t see her as a more complete character considering how the film uncomfortably distances itself from her as anything less than an aggravated black woman. Much more time is given to Ellis as a racist figure that reforms his ways in a manner that is bizarre it makes Rockwell’s previous performance as a racist-turned-good in Three Billboards seem more nuanced than apologetic.

This type of story is treated far too timidly as a feel-good film for the harsher examination on race relations that it could have been. The whole we’re-not-so-different-you-and-I aesthetic is so unbelievably hokey and forced that it doesn’t take one familiar with the history to see the flaws and dishonesty in the depiction. This is sadly not a new case either. There have been plenty of true-story white savior films that have been structured in this way that always try too hard for drama, where the focus seems more centered on an emotional character arc than anything all that reflective.

Perhaps the biggest insult with such a film is that it runs well over two hours and finds nothing new or meaningful to present. Henson and Rockwell are placed in thankless roles where they fulfill the mere check boxes of tropes in a film meant to spout a look-how-far-we’ve-come mantra about racism being over and how white people can feel good about themselves with such troubles in the past. What a waste The Best of Enemies becomes on this level which took a gander at the friendship of Atwater and Ellis and only regurgitated the safe concoction of Green Book. I had to remind myself several times that this is not a parody sketch on the white savior film. It’s real and it’s still just as embarrassing as its predecessors. If you’re really curious about the lives of Atwater and Ellis, please, PLEASE, look up the true story rather than this sappy melodrama of contorted history.