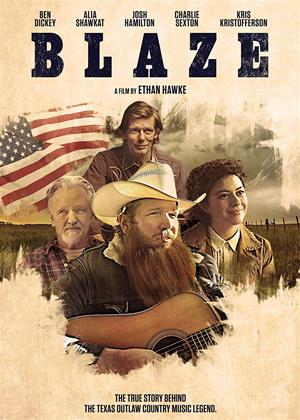 Not released
Seymour: An Introduction

Blaze Foley initially doesn’t seem like the type of country music icon a Hollywood executive would gravitate towards for a movie. He lived a life blurred intimately cozy moments with his muse, casual jam sessions with his music pals, and drunk ramblings when he just wasn’t feeling it. He meets his girlfriend’s strict Jewish parents and navigates their conversation on faith with a careful ease. He has fought with people but keeps his hate mostly verbal as he watches his inspiration and motivation evaporate. Probably the juiciest scene is the opening sequence where Blaze is in a studio rambling and spitting into the microphone about so much stream-of-consciousness content, almost by design to piss off the recording engineers.

But director Ethan Hawke chose to not make Blaze’s life so much a theatrical drama feast but an emotional remembrance buffet, as though a bunch of friends gathers around the bar to chat over beers about their best friend biting the dust. Blaze Foley, played amazingly by Ben Dickey, is displayed as a very human musician with aspirations of becoming a stellar guitarist. As he states, “I don’t want to be a star, I want to be a legend.” And indeed he was, never becoming as famous as the likes of Willie Nelson but a strong enough player to be worthy of Nelson’s ears.

Part of what brought him to this point was his tender muse, Sybil Rosen (Alia Shawkat), a sweetheart he met at an art commune. They share so many tender moments together that they’re clearly meant to be together, even during Blaze’s toughest of times. In their better moments, they can snuggle on a sunny country morning under blankets, taking it easy, maybe Blaze strumming a tune somewhere in between. After Sybil encourages him to move to Austin to further his music career, they face troubles as Blaze feels the pressure of composing lyrics and maybe landing a record contract. Sybil’s influence is weakening and she fears their relationship maybe next.

Another perspective in the film is that of his close friends, Van Zandt (Charlie Sexton) and Zee (Josh Hamilton). They tell his story in a radio interview, Hawke himself playing the interviewing DJ, working as a strong framing device for giving us a better idea of those who knew him best on stage. He’s a much different person than how Sybil sees him; he’s more of a loose cannon of guitarist that sometimes drone on his set for too long and bite back when the rowdy barroom audiences grew impatient.

All of this leads up to Foley’s tragic demise, easily the best shot scene of the film that treats his dying moments with a stagger of reflection as the breaths lose strength. It’s a beautifully dark sequence that doesn’t try too hard to overdramatize the gunshot that took him down, treating his last moments with quiet dignity as the audio fades, the lights go dark, and Blaze takes his final steps.

Blaze moseys along with a gentle nature that treats the prolific figure with a film rarely seen for this type of story of musicians who rise and fell. I think what makes it so unique is that while he was alive, Foley never rose too high or fell too low, but in his stumbling, towards greatness, he became the legend status he sought. While he may not have the pop culture iconography, his music remains as some of the finest of country music. I’d never heard of him until this film, but after listening to his emotional “Clay Pigeons” he’s one artist that will never be forgotten.