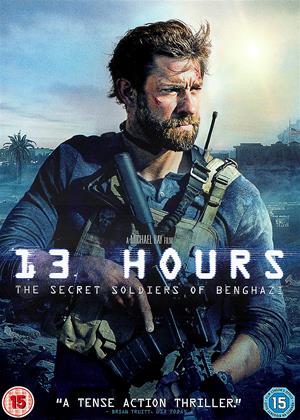 A suspenseful and underrated action spectacle from Michael Bay. - 13 Hours review by SD

The much maligned Michael Bay directs with his typical visual panache and explosive dynamics. I found the film surprisingly compelling and suspenseful (I didn't know much about the true event) Michael Bay is clearly passionate about the characters/story and the film shows some surprising restraint at times and largely steers away from the politics of the situation (yes, I am aware of the scene with the Libyan militia machine gunning an American flag in slow motion!) to focus more on a blow by blow account of the events getting out of hand.

The final hour goes full Bayhem, bullets and explosions galore and he certainly knows how to get plenty of bang for his buck. Bay detractors will still not be won over by the bombast, fast cuts etc. But I found it gripping and exciting, and does a very good job of portraying the extreme escalation of what happened, the claustrophobia and the chaos of who is on whose side.

Similar to something like Black Hawk Down (although I actually preferred this, as I found the actors very well cast and seemed believable as a team)

A decent blu ray transfer helps the cool blues of the dusk/dawn sequences and the crushed blacks of night and the bright orange of explosions/gun fire is nicely contrasted. I'm personally a fan of Bay's visual style and this is a good fit for him as a director, and he pulls back from the comedic wackiness of some of his other films and actually generates some decent drama and emotional performances. Even allowing the film to slow down and his characters to show some emotion. Recommended.

When I think of director Michael Bay, I think of loud, explosive and bombastic action. His pictures are big, dumb and intended as fun with a cartoonish level of violence and stunts. He’s not exactly the man I’d pick for a war drama. He could have surprised me with 13 Hours, showcasing he can do so much more, but it’s a sad example of how Bay’s odd trademarks do not die in a genre where they probably should have.

Bay approaches the subject of the Benghazi incident of 2012 with the usual amount of flat characterization and chest-beating patriotism. He follows the chain of events for the 13 hour stand-off of American soldiers defending themselves against local radicals down to the hours and minutes. He sets up the American soldiers as typical movie soldiers - goofing off and cracking jokes on their downtime when they’re not all maintaining long-distance relationships with their families. And then the fighting breaks out with automatic weapons, sniper fire, molotov cocktails and RPGs. When the fighting ceases for a moment, the soldiers take a breather to assess the situation and talk about what they miss from America. Then another scene of violence breaks out. Then more longing and exposition. Then another action scene. Then more cliche banter. Repeat this process for over two hours.

As much as I’d like to applaud Bay’s desire to be both patriotic and venture outside of his comfort zone of brainless action, this movie just has a very off-putting tone. Watching Bay apply his usual tropes and excessive action scenes drains the emotion from the screen (especially at 2½ hours). He bludgeons the screen with a level of violence that grows monotonous until it balloons to a point of being inappropriate. What was the point of all this? What was he trying to say? Did he even want to say anything? From this angle, it appears that he used the Benghazi incident as an excuse to film his own movie adaption of Call of Duty. The characters are certainly as simplistic as video game players to the point where it's insultingly terrible in the portrayal of soldiers as just bearded grunts without a thought in their heads.

If all you’re looking for is military action, one of Michael Bay’s strongest traits, you’ll certainly get that here. Mobs of ISIS militants are brutally gunned down in the streets and across plains. Cars and buses explode in giant balls of fire. Mortars assault the CIA’s office with powerful blows and giant chunks of rubble shooting into the sky. There’s lots of booms, bams and bullets for the action junkie, fueled by Bay’s style of dialogue about “kicking ass” and “welcome to the party.” Don’t worry if you’re not sure who the bad guys are. Bay makes this perfectly clear when a few of them fire AK-47s up at a waving American flag.

But is that how the Benghazi attack, one that resulted in the death of American servicemen, should be remembered? Should it be viewed as a non-stop action video game where soldiers sling the usual bits of overused dialogue to evoke emotion? This is all that 13 Hours offers anyway. There’s no political commentary on the situation (none implied anyway), no deeper aspect explored of these soldiers and no examination of the lead up to the clash. All we follow are the soldiers of this incident who deserve more than such a base depiction of these events. Where there was tragedy and drama, Michael Bay creates only melodrama amid his desire to watch people get shot and buildings explode real good.