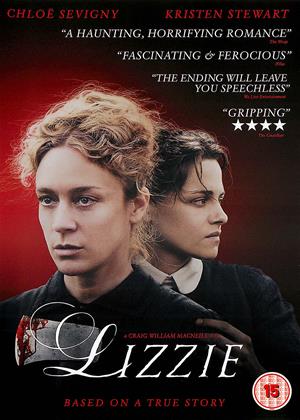 A film such as Lizzie would seem to be a rousing tale of true terror within a period piece. Here you have the gruesome story of Lizzie Borden told with the astoundingly talented Chloë Sevigny and Kristen Stewart in lead roles and it’s just a snooze-fest. And when a film features a bloody murder with a naked Sevigny wielding an ax and is boring, something has greatly misfired here.

The sleepy aspect of 1890s Fall River, Massachusetts is embraced far too much in telling this story that it comes off with the appeal of a faux Jim Jarmusch or Gus Van Sant, where a greater truth seems missing in the quiet. Chloë Sevigny plays the 32-year-old Lizzie Borden living under her the rule of her strict dad. Things seem pretty tired despite the arrival of an immigrant and Lizzie having a seizure during an opera. Finding something to do, Lizzie gives the Irish immigrant Bridget (Kristen Stewart) a formal education as she can’t read. The story soon proceeds with the hocking of jewelry, rape, and the inevitable murder.

It sounds like there’s a lot going on here but director Craig William Macneill keeps everything far too clinical for this type of story. Long scenes of not much going on are played out for an unbearably extended time, seemingly out of reflection but coming off more like the oversized croutons of a very light true crime salad. There’s a lot of dramatic and violent stuff going on here and yet it’s all performed with the certain stuffiness of a school play or television history lesson, where the actors emote surprisingly small next to the traumatic events that follow. So dry is this story that just to spice things up there’s a non-linear tease of the murder that’s coming. To be fair, yes, it’s a fairly good scene of watching an unhinged and naked Chloë Sevigny brutally murdering her stepmother Abby. But leading up to that moment is a real chore, coming off as the murders by Lizzie and Bridget more as a summer pastime than some heinous plot.

But I’ll credit where credit is due and this type of film does deserve points for remaining focused on its subject manner. We get all the dirty details on the series of events the led up to the memorable murders with some sense of detail in keeping the story from lingering off into subplots. One could even praise the film’s desire to not overly glamourize the murders is an astute call to avoid that addition of excess or an unfavorable light where someone may view Lizzie as an inspiration. Of course, in order to fully embrace that aspect, you’d have to mistake the lack of drama for a certain subtle charm, one that I can’t quite see under my microscope.

Where I can praise Lizzie is that it does boast a certain sophistication for its material that treats its history with a quiet demeanor, while still showcasing some sex and violence to entice a younger crowd with the muddy story. Outside of that, there’s not much else to this picture.