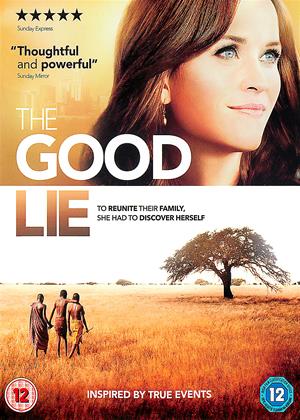 Reviews (1) of The Good Lie

I really enjoyed this film. It was carefully and sensitively made with strong acting and character development. While also maintaining a very good humour, it distilled a convincing picture of the reality behind the crumby newsbites that we never have time to digest. As soon as it was finished I wanted to watch it again.

The Good Lie has all the makings of being a shmaltzy feel-good movie in the vain of The Blind Side. Just looking at the poster, I figured that the movie would focus on Reese Witherspoon taking in the group of Sudan refugees as their white, Christian saviour. But this is a film that narrowly avoids that old bit and the makes the film a much more personal and emotional journey for the Sudanese themselves. We see everything that they see so that we not only gain their perspective, but get to go on the heartwarming/shattering adventure with them. It’s a film that takes all the necessary steps to tug some tears and damned if it doesn’t get the job done for being as staged as it was.

The movie begins with the African wars of the 1980’s where a group of Sudanese children flee their village during an attack. Leaving behind their dead parents in a storm of gunfire, they make the tough journey through the plains for relief. A few are killed due to disease or following forces and some are captured. But after many painful losses and sacrifice, a few manage to arrive at a refugee camp and join the ranks of the Lost Boys of Sudan. Those that survived are Mamere, Jeremiah, Paul and Abital. After thirteen years in the camp, they’re finally approved as adult for refugee status to enter America. Through the messed up rules of the system, however, Abital is sent to Boston while the three boys of the group are sent to Kansas City. Carrie Davis (Reese Witherspoon) aids the men in finding jobs to pay off their debt, make a living and perhaps find Abital.

Usually this is the section where the feel-good movie would start. Carrie would be more focused on and established presumably to relate more towards an American helping confused foreigners. The Sudanese refugees would start off curious and well-intentioned while slowly revealing their past in between sweet moments of discovering American culture. In fact, cut out the first half-hour or so and you’d have that movie. It features all the fish-out-of-water misunderstandings as the boys learn about everything from McDonald’s to hardship of education. They have a few stumbling blocks with homesickness, separation and drugs, but everything will work out in the end despite the flawed system in the post-9/11 America.

But that first half-hour couldn’t have been more important to such a tale. We see brief flashes of their Sudan days during their modern lives not as clues, but painful reminders. Their entire journey to the refugee camp could be a movie in itself, but bringing it full circle with their new life in America paints a bigger picture. It’s got to be tough to place yourself in a country brimming with food and freedom realizing your childhood family and friends are either dead or suffering on another continent. When their job is to throw perfectly good food away at the grocery store, they can’t help but dwell on the dry days of the Sudan when they relied on their own urine to survive.

The film is all the more effective by the performances of the real Lost Boys of Sudan. These are actors who have experienced this pain and loss first hand. They are not so much acting as they are drawing from their own hearts and minds of the hardships they faced. As a result, you completely buy into this very personal story, hokey as it may appear on its surface. The additional shock and pain of the war in Sudan makes their struggle all the more heartbreaking and triumphant. Some credit should also be given to Reese Witherspoon and Corey Stoll who act as the guides these refugees need, not harping so much on the Christian angle as that aspect of their lives was already covered in the camps. Their support may be a little less believable as they are very kind and understanding with these people getting used to a new culture, but you do feel grateful that such good people found each other.

The Good Lie is a movie that earns the tears it aims to reap. Moments that seem so simple for a film of this type pack an extra little emotional punch from the fully developed story. Everything wraps itself up in the expected pretty bow, but you can’t help but desire that warmness after all the death and separation these Sudanese are put through. Though whipped up intentionally in certain areas of the script, the majority holds an honest and genuine tone. It may steer a little hard away from the darker aspect of such a tale, but what is present makes for exceptional drama. I rarely cry in pictures, but I can still feel the tear ducts fill around me the moment when these children torn apart by conflict reunite. I dare you to feel nothing when that scene strikes.