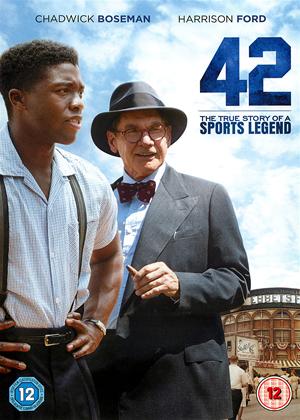 Most people won’t know the story of Jackie Robinson (Chadwick Boseman). Correction, most people outside of the US won’t know the story of Jackie Robinson, the first African American Major League Baseball player. That doesn’t matter, the film isn’t about baseball, it isn’t even about racism (The films major theme being racism and its effects on society at the time), it’s about Jackie, number 42 himself and how he became a symbol for something greater than the world that he had been born into.

Chronicling Robinson’s recruitment to the Brooklyn Dodgers by general manager Branch Rickey (Harrison Ford) and the inevitable hardships he had to endure as both the team and the country resisted the drastic change. As Robinson leans his place among the team Rickey must handle a baseball administration that just isn’t ready for this kind of change, a change that threatens to ruin his plans to change the game of baseball for good.

Written and directed by Brian Helgeland, 42 isn’t the most original of stories, it lacks a standout moment where you can’t compare it to any other biopic from the last 20 years but in being so consistant it has taken the time to make the moments it does have stand out for other reasons from the wonderfully bright way the film is shot to the outstanding performances by Boseman and Ford, the latter of whom blew me away.

Ford’s Rickey is a tortured soul, a man working for a behemoth he doesn’t quite care about anymore as he tries to hide his apathy with his business dreams, his love of money and winning above everything else. You’ll never see Ford this good, even in the outstanding The Mosquito Coast, and he brings out the best in Boseman. The two share a type of synergy as they lift the film above the limitations of its ordinary story. The story of Jackie wouldn’t be the same without them.

The films only real flaw is the supporting cast who all provide reliable turns but are portraying predictable and lifeless people. From Lucas Black’s Pee Wee Reese to T.R Knight’s Harold Parrott, they all serve a purpose instead of stand on their own as people, real people with their own thoughts, they think what the film needs them to and while Boseman and Ford lead the film, the rest are resigned to follow and not stand out, something that in my opinion is a crying shame.