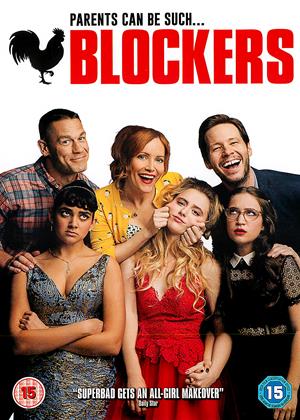 One of the better recent comedies - Blockers review by PC

Good to see that Hollywood can stil make decent comedies after recent attempts by the likes of Amy Schumer have bee n very disappointing. It has several genuinely hilarious set pieces and likeable performances, it may not be original but it has plenty of laughs.

Didn't have much in the way of expectations for this movie but it was a really pleasant surprise on a cold wintry Monday night, maybe we were just in the mood for a laugh. Lots of laughs, fun interplay between characters and a few cringes but overall well worth the 98 or so minutes.

Not as funny as it thinks it is! - Blockers review by CS

I was expecting a lot more from this film, believing it was a comedy, which it tries very hard to be, I just didn't find it very funny myself! In typical American Pie/Porkies style, this is simply the story of three parents trying to stop their teenage daughters losing their virginity on prom night. Why prom is so special for Americans is beyond comprehension for most of the planet, after all it's really just an end of term school dance for rich kids! Lots of done before comedy routines which mostly fall flat on their face, yes there are one or two cringe moments, but it's more cringe than laugh out loud. The actors try very hard, but even they look like they can see it's not really doing what it should, in fact I think the actors do a very good job of presenting what is really a very mediocre script and storyline. I think this one is destined for the charity bin!

Parents just don’t understand. Try as we might, there’s always something new on the horizon we’re not ready to handle. Blockers takes this relatable part of getting older and details it with all the expected trimmings of a raunchy comedy, complete with awkward sexual encounters, booze, and stammering conversations. If only the film weren’t so desperate for a laugh it may have earned its obligatory heartwarming finale with a progressive nature.

The film starts of relatable enough with the parents Lisa (Leslie Mann), Mitchell (John Cena), and Hunter (Ike Barinholtz) dropping their daughters off on the first day of school. It’s a sweet scene despite forcing them to be together by their kids becoming quick friends. The kids now at school, the parents then stand there with a “now what?” attitude. Let this signal the path for the rest of the film as it’s not enough drama that the parents are concerned when their daughters are off to prom. No, they’ll have to find themselves touching Gary Cole’s testicles and butt-chugging in order to stop their girls from having sex on that night, even though they’ll do more harm than good. The lesson comes telegraphed early for anyone who has even a modicum of parenting experience.

I really don’t understand why the film has to force through these tired aspects when there is already enough interesting stuff going on with the parents. Lisa is afraid of finally losing her girl that has acted like her best friend over the years considering she’s a single mother. Hunter is also single and recently divorced, struggling to be a bigger part of his girl’s life. And Mitchell is just a swirling bag of mixed emotions, fragile when it comes to growing up and bitter when it comes to guys wanting to date his girl. There’s plenty to make the one-wild-night entertaining but the many side attractions of kinky mistakes, slapstick antics, and car chases that involve vomit all feel like padding on what could’ve been a great character study.

But even when aiming lower on the level of a raunchy comedy, Blockers still comes up short. The bulk of the comedy comes from the parents trying to decipher the coded text message about the girls all decided to lose their virginity at the same time. Not a bad scene but it quickly descends into the idiotic “we need to do something” mentality that quickly leads to hijinks. And yet a lot of these gags that the movie prides itself on come off rather stale. Take for example a scene where John Cena starts busting down hotel room doors to find his daughter and stumbles onto some teenagers holding a summon circle of the occult. Cena’s reaction: “Play sports!” Scenes like this make me believe half this script was fished out of the dumpster of rejected episodes from King of the Hill.

Blockers isn’t completely without some merits. The boldest claim is the featuring of one of the teenage girls finding herself sexually attracted to girls but terrified to tell both her friends and family. It doesn’t go too over-the-top with this aspect, even for the girl’s fondness of Xena that seeps a little too cozily into reality. But a film can’t merely rest of these smaller aspects that come off more as PSA additions than a more meaningful story. Consider how at the same time Blockers was released there was another teenage homosexual romance; Love, Simon. That film gave a more insightful and charming presence to its progressivism while Blockers merely puts in the lip service and then brings its lips right back to the bland beer of raunchiness. While these types of improv and gross-out comedies may be broadening the audience with its elements, the gap of gross and goofy remains firmly faint of inspiration.