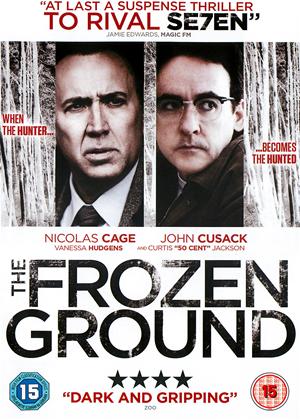 Reviews (5) of The Frozen Ground

This movie is excellent entertainment and had me gripped from the start. A BIG problem is the lack of subtitles on the DVD, because so much dialogue is so naturalistic as to be inaudible. However, the film itself is sound.

What is intriguing here is that a detective knows who murdered girls from early on - but he just cannot prove it. The movie is a quest for that evidence, with a neat trick in the final scenes concluding the movie well.

There are fine acting performances all round. The jeopardy increases throughout until the final scene - essential for a film structure but making me think if everything here is 100% true.

Still, it's based on a disturbing true story. Set in 1983 too, though not much 80s flavour!

The is one of the best thrillers I have seen in the last decade. A refreshing change from the usual LA or New York set detective dramas.

Well worth a watch - The Frozen Ground review by BE

I was unexpectedly impressed by this movie. It's slick and absorbing. I had not read the synopsis so did not realise it was based on true happenings until the credits came up. Excellent acting all round although I have a problem with unclear American diction. I usually access the subtitles facility for American movies but none available on this DVD. Fortunately, this did not impede enjoyment of the film.

If you've not seen this one give it a go, Reasonably well made and acted, I thought the script and editing could have been better, but overall the true story of an evil person's shocking deeds and how he got his comeuppance in the end keeps the viewer going.

If you like films based on true crime, this is one for you.

Something of a cinematic 'page-turner', this fact-inspired serial-killer procedural offers up a pulpy mix. However, it's much better than it had any right to be and contains nicely restrained performances from Nicolas Cage (suitably muted), John Cusack (very creepy yet understated and expertly wrought), and Vanessa Hudgens. This is another exhibit proving that Cage can still deliver excellent performances and he's not all-out wacky in very film. I'm not sure how close to the facts this film plays - several plot-turns are sexed up for dramatic effect but most films based on fact are guilty of this. It's a minor film, but still a good thriller and reminder how good Cage and Cusack can be when given decent roles.

Nic Cage has made some truly awful films in the last few years - for example, 'Season of the Witch' and 'The Wicker Man' remake were nominated for Razzie awards - but this one isn't too bad.

It's a police procedural film, set in Anchorage, Alaska and is based on actual events. Nic Cage and sidekick Dean Norris (who played brother-in-law Hank in 'Breaking Bad') are on the trail of serial killer John Cusack who has been implicated in the rape, torture and killing of a number of prostitutes in the boom years of the Alaskan oil pipeline construction. The town is teeming with oil men and the women who service them and clues and witnesses are hard to track down.

The film centres on the protective relationship that develops between Nic Cage's State Trooper and a teenage prostitute played by Vanessa Hudgens who is an escaped victim. As you might expect, good guy Cage tracks down and entraps bad guy Cusack and (of course) all ends well.

It's OK - but the problem I have with Mr Cage is that the characters he plays always seem 'over the top' with too much shouting and attempts at dramatic moments - and he is guilty of the same here. Having said that, it's a great improvement over some of his other films - and the Alaskan scenery is worth watching.

It's a pretty average sort of film so I'll give it 3/5 stars - watch it if you like Nic Cage and police procedural dramas, but frankly it reminded me of a big budget version of the TV series 'Law & Order - Special Victims Unit'.

[Aside: Look up "Robert Hansen" on Wikipedia if you want to learn about the background to the film]

he Frozen Ground, a psychological crime thriller that boasts some fine acting from not only John Cusack and Nicholas Cage but also Vanessa Hudgens, an actress who has been looking for a vehicle to impress with, has more aspirations than accomplishments with the films final words lacking the punch they rightly deserve.

The film follows Sergeant Jack Halcombe (Cage) as he is assigned his final case with the Alaska State Troopers, an investigation into the disappearance of multiple girls, some found, others not. He finds assistance from local prostitute Cindy Paulson (Vanessa Hudgens), a woman who was kidnapped and raped by Robert Hansen (Cusack), an upstanding member of the community and a sadistic murderer to boot.

It’s not that the film is bad although I’m not saying its good either, it’s just that it doesn’t tell its interesting and disturbing story with enough guts or style to really make the film a piece of entertainment. Director and writer Scott Walker is so enamoured by the truth the film is based on that he forgets he is constructing a film for entertainment purposes. While having the usual plot points and tension filled chases, the films dramatic scenes lack depth.

The whole exercise feels like a true crime documentary, the characters don’t feel real because Walker has ironically stuck to the facts. Cage’s Halcombe is one cliche after another as he brings heart to a character crafted out of tragic backstory and moral authority. Without Cage he would be just another irritating detective from a late night TV procedural.

Cusack is just the right amount of depraved to pull Hansen off. Full of malice and venom, Hansen hides it behind fake charm and bravado something Cusack has proven time after time he is excellent at. His disguise must obviously falter but Cusack manages to make Hansen’s fall almost poetic despite the predictable and lazy nature of the films final act.

Unsure of what its really trying to do, the film attempts to honor the people Hansen killed and the lives he ruined along the way but the film somehow trivializes what happened due to the half hearted approach the filmmaker took and the predictable yet honest depiction of the story.