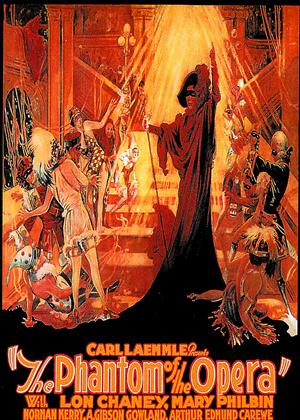 Rent other films like The Phantom of the Opera

Reviews (2) of The Phantom of the Opera

The Phantom Strikes Again! - The Phantom of the Opera review by Count Otto Black

Ancient and primitive though it is, this is one of the greatest movies of the silent era, and it needs to be appreciated as such. It's also the only version of a frequently filmed and adapted story, including the Andrew Lloyd Webber musical, to stick fairly closely to Gaston Leroux's source novel, in which the Phantom isn't a composer driven mad as a result of being facially disfigured in a fire, but a man alienated from birth because he's simply that ugly. By the way, when the Phantom's mask comes off, that's Lon Chaney's actual face, hideously distorted by very painful prosthetic makeup. When audiences first saw it in 1925, some of them fainted, because nobody had done anything quite like that before. I'm not sure many stars would be willing to do it today.

The story doesn't really make very much sense (though it's actually true that the Paris Opera House has a lake in the basement), but it works perfectly as a fairy tale in the Grimm tradition, where the internal logic is all that matters. Which is just as well, since one major character is lifted directly from the novel, but because it's a silent movie, he never gets to properly explain his backstory, so we just have to take it for granted that a weird person made up to look vaguely foreign is wandering around explaining important plot-points (in the book, he's working for the Shah of Iran - never mind why). But the truly magnificent Surrealism of the whole enterprise is present throughout. Since CGI wasn't a thing back then, whenever they show a huge audience applauding a performance on the stage of a vast opera house, you can be sure they actually built the set! The most extreme example of that kind of thing was the life-size replica of Notre Dame Cathedral they built for "The Hunchback of Notre Dame" (also starring Lon Chaney), which you can glimpse in the last few minutes of this movie when the mob pursuing the Phantom run past it.

Although it's usually shown nowadays in black and white, this print uses digital technology to restore the extremely ambitious tinting throughout the film, including a few scenes that are nearly in color, thanks to a combination of an experimental prototype of Technicolor that didn't include blue (a handful of movies were entirely shot in this weird format, most notably "The Mystery of the Wax Museum") and some other scenes where every frame was hand-painted. But what really holds it all together is Lon Chaney's performance as a monster who, like all the best cinematic monsters, is more tragic than truly evil. He effortlessly steals every scene he's in, and acts his heart out through makeup that made every facial movement agony. If you don't feel sorry for this monster, you're a lot less human than he is!

Classic film - The Phantom of the Opera review by CP Customer

Absolutely brilliant. Made in 1925 this is a classic silent film. Lon Chaney apparently does his own make up. I really enjoyed it, the acting was great. The masked ball scene was actually shot in colour which must have made it one of the first films to do so.