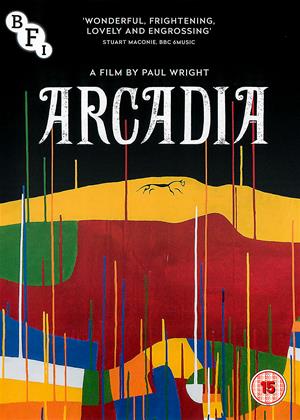 Synopsis:
Award-winning director Paul Wright (For Those in Peril) explores our complex connection to the land we live in with an archival remix drawn from more than 100 years of Britain on film. With a new score by Adrian Utley (Portishead) and Will Gregory (Goldfrapp), 'Arcadia' embarks on a visceral sensory journey through the seasons, exploring the beauty, brutality, magic and madness of our changing relationship with both the land and each other. This fresh new work crafted from the past is a folk horror wrapped in an archive film; get ready for a very strange trip indeed...
Directors:
Paul Wright
Producers:
John Archer, Mark Atkin, Adrian Cooper
Voiced By:
Laura Rennie, Ian Sexon
Studio:
BFI Video
Genres:
British Films, Documentary, Music & Musicals, Special Interest
Countries:
UK

I'm writing this review after my second viewing of Arcadia, which only confirmed my initial opinion that this is an incredible piece of work. Having read the two earlier reviews on this site, it is fair to say that my viewing experience could hardly have been more different to theirs! Which is not in any way a criticism of those reviewers, simply an observation of how vastly individual experiences of the same piece of work can differ.

I am tempted to comment directly on a couple of the points made by the other reviewers but I won't, because their opinions are absolutely valid and I wouldn't want to give the impression that I am trying to prove them wrong (or me right). All I will say is that I would recommend this film as highly as it is possible to do so - I see so many films that fade almost instantly from the memory, so when I come across something like this that really affects me I just have an urge to shout about it to anyone inclined to listen (usually no one, or perhaps a patient friend nodding politely).

It is not a documentary in the conventional sense, rather (as pointed out by a previous reviewer) a film poem. For me, poetry is about gut feeling and instinct, rather than analysis. It is political only in a tangential way and does not profess to have 'answers'. Some of the montage sequences in this film were so powerful they literally brought tears to my eyes, which I am fully aware sounds gushing and hyperbolic, but it's true so we're all just going to have to deal with it. I think I will find Arcadia endlessly rewatchable because there is just such abundance in it - on my second viewing new, different patterns and associations emerged which I had not seen the first time, and images which had barely registered the first time suddenly jumped out at me. I also loved the way that certain images are repeated in different contexts, slightly changing their meaning (or their feeling) each time. I said that I would prefer not to analyse the film, which is not the same as saying that it can't be analysed. It would be easy enough to dust off all my old film studies terminology and discuss the film in a very academic way - but for me, to do so would be to risk losing the essence of the film.

Anyway, I think I am too excited by the film to write sensibly about it. I suppose I just wanted to provide an alternative view to those that had already been published here. I will just urge you once again to give it a try. In my opinion it is a treasure trove of fascinating imagery skillfully woven into an ever changing kaleidoscope of patterns and associations. I'm gushing again, so I will stop writing before I use the phrase 'patterns and associations' again, and head over to the BFI website to buy a copy.

Oh, one more thing - it would be remiss of me not to mention the soundtrack which I loved and massively contributed to my overall experience.

This assembly of film footage (from early moving images of life in rural Britain through to clips from the 1970s) is always interesting and thought provoking. As the film proceeds many of the clips are repeated, leading to a sense of an extended film poem.

My only reservation is that it comes across as slightly bland, with a lame and woolly conclusion that 'the answer lies in the soil'.

There are images of positive solidarity and community, and there are horrible images of fox-hunting and inequality, but it feels lightweight in comparison to some of the more political documentaries.

Some interesting content in an incoherent framework - Arcadia review by RC

Despite containing much fascinating footage it is difficult to discern a pattern or intention, let alone meaning, in the montage.

It is claimed by some to be about our relationship with nature and the land (or something) - but I don't see that reflected here. There is a good non-documentary film to be made about this subject, but this isn't it. Frankly it is a bit incoherent.

Three stars solely because some of the archive clips are interesting in themselves, not for the whole as a movie which would get one star.

This impressionistic collage of archive film of rural Britain is done in the spirit of freeform documentaries like Baraka, Koyaanisqatsi, Aquerela and Apollo 11. The facts are here for you to divine quite clearly that we have lost touch with the past and this documentary goes a small way to show us what it is we've lost (and maybe what we've gained) today. It's interesting to see, educational as well a moving me on a deeper level. The music, editing, occasional prose all building to a succinct and strange celebration of our rural heritage. Recommended for those who aren't expecting the History Channel / Fox News style documentary-style. Let it take you on a journey.

The extras are good too, which shows much of the included archive footage uncut. However, be warned one of the clips show the very slow death of a sheep as it's being butchered in real time by a garrulous Dartmoor farmer... A bit much for a soppy date like me.