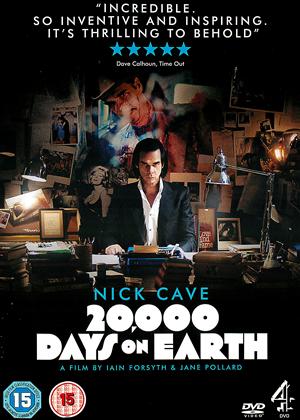 You'd think a film consisting entirely of a middle-aged rock-star talking about himself and his music, hanging out with his celebrity buddies, and doing a little bit of studio recording would be duller than chartered accountancy. However, Nick Cave isn't your typical incoherent egomaniac pop has-been. Remember, when he's not making records, this guy writes novels. Real ones, not rock-star vanity projects that somebody else wrote 90% of. So although he's probably broken the laws concerning narcotics nearly as often as poor befuddled Ozzie, his brain clearly isn't fried. In fact, he's obviously very smart indeed, as well as wildly imaginative, to the point where he can even be interesting while talking about the weather. Which is just as well, since he does in fact talk quite a lot about the weather.

Basically this is a guided tour of Nick Cave's fascinatingly bizarre mental architecture which grabs your attention from the get-go. What stopped me from giving it 5 stars was that the opening scenes grabbed my attention just a little bit too much by promising me the kind of film David Lynch might make in one of his less pretentious moods. And however good the movie we actually get may be, I was a little disappointed that it didn't go anything like as far as I initially thought it would. And also, although I realize that this is a documentary about what Nick Cave does on an average day, and most days he doesn't fight terrorists or save children from burning orphanages, it would have been nice if a little more had actually happened, and he'd gone out for a nice lunch with an old pal and so on ever so slightly less.

But these are very minor problems with a film which is mostly excellent. Long before the end I was wishing that Nick Cave was a friend of mine because he's obviously a tremendously interesting guy to hang out with. I even forgave him for that Birthday Party gig which was so loud I was partially deaf for a fortnight. And it takes a very good documentary indeed to do that!

Can an autobiography be too self-obsessed? I think it depends on how much you admire the person prior to watching/reading it. I had no knowledge of Nick Cave and therefore saw this from the outset as the reflections of a narcotic addict whose addled and slightly delusional mind couples with an unpleasing personality. Maybe he did start out as the most interesting person in the room but fame has converted this to egomania. It received awards, not in my opinion deserved.