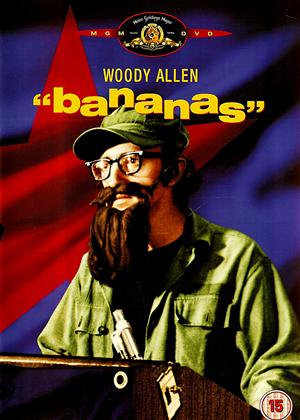 Some sparks of brilliance, but over-indulgent - Bananas review by CP Customer

If we snipped out the first half of this film, then we would have a pretty good 40 minute comedy romp.

Allen unfortunately splices all manner of peculiarities onto the end, to make up the

remainder of the 79 minute run-time.

If you like Woody Allen, or the Marx Brothers, or Monty Python for that matter, then it's probably worth watching for the great bits, but as a stand-alone film, it's pretty shoddy.

This very early Woody Allen film is from the days when he was best known for standup and sketch comedy on TV, and boy, does it show! This isn't so much a movie as a loose assemblage of unused TV scripts. The first third of the film, in which Woody lives in New York, does various bits of wacky business to show what a schmuck he is, and romances a girl with predictably limited success, is obviously a recycled half-hour sitcom that was probably rejected for being slightly too "adult" for American TV 45 years ago. It has almost no relevance to the rest of the movie, and most of it is somewhere between not very funny and not funny at all (though I did laugh at the scene taking the idea of a disappointed father who wanted his son to be a doctor to its illogical conclusion).

The second third, in which Woody arrives for no particular reason in a Caribbean country which is obviously meant to be Cuba, starts off rather well with a plot by a dastardly dictator and his henchmen to make evil use of this absurdly naïve American, but these villains are quickly sidelined, and we get another recycled half-hour sitcom which must have originally been about Woody joining the US Army, going to boot camp, and being rubbish at it, transposed to a Cuban rebel camp where exactly the same combat-training gags can be used. This is funnier than the first part, but still rather crude and almost plotless. Also, the hispanic actors cast as the rebels can't act at all, and some of them are clearly struggling with the English language. And the ill-advised "zany" jazz music that tells you which bits of this subplot are supposed to be hilarious is similar to but much more annoying than Benny Hill's relentless "Yackety Sax" theme. In fact, Woody himself apparently knew it was an incoherent, second-rate mess, since the first two-thirds of the film - Woody as a coward who interacts disastrously badly with any kind of technology and somehow becomes a "heroic" though hopelessly inept resistance fighter - were more or less remade as the far superior "Sleeper".

And then, almost an hour into a 79-minute film, we suddenly get to the bit which, if you believe the advertising, is the main theme of the entire movie - Woody becomes a crude spoof of Fidel Castro. Which is relevant for about 10 minutes, before an excuse is found to ditch the Cuban revolution plot completely in favor of a long and desperately unfunny courtroom scene and a downright odd conclusion to the romantic subplot from Part 1. Unlike the Marx Brothers' "Horse Feathers", in which the idea of a wildly unsuitable foreigner becoming the dictator of a small country and causing mayhem is genuinely the entire point of the film, and is used in a surprisingly subversive way, the political satire in "Bananas" is almost as minimal as the relevance of the title (which is justified by one throwaway reference to bananas in the whole movie). This is really just Woody Allen finding excuses to do his usual schtick for 79 minutes, most of which have a loose theme sort of tying them together, and sometimes it's funny, but too often it isn't. Watchable if you're stuck for something to watch and not too fussy.