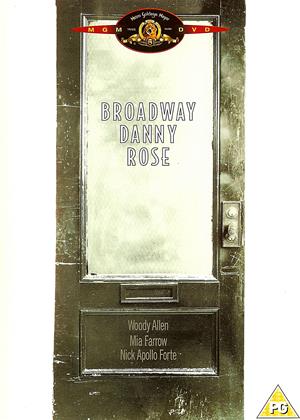 this is woody allens most under valued film.the story of a low level theatrical agent who becomes involved with a gangsters moll may be low on allens trade mark wit,but this is more in the vain of manhattan than annie hall. lovingly shot in black and white with an acordian score creates an air of romantic melancholy that perfectly suits the story.romantic,funny and a happy ending what more could you want from woody.

My favourite Woody Allen, and it's a mystery to me why this funny, warmhearted morality tale isn't more widely loved. It begins with a group of (contemporary) comedians in a delicatessen who spend the evening reminiscing and telling Danny Rose stories.

Danny is a theatrical manager and the anecdote of the film takes place around New York in about 1970. He handles unpropitious acts (like his blind xylophone player or a skating penguin) who he promotes with great consideration and optimism. Danny signs Lou Canova, a fading Italian night club crooner who might be about to break through, and the story concerns Danny's adventure escorting Lou's other woman, a noisy blonde, Tina Vitale played by Mia Farrow, to an important engagement.

Gordon Willis' black and white New York is a dream. Woody is immensely sympathetic as the devoted champion of lost causes. Mia Farrow is fun as the intractably pragmatic former mafia moll. But the most stunning performance is by Nick Apollo Forte as the overweight, alcoholic former teen star chasing his second chance at the big time. He is perfect and even wrote and performed a couple of great romantic supper room ballads for his act.

The script is one of Woody's funniest and some broader humour works well too. It is extraordinary. The brilliant last scene at the Thanksgiving dinner is incredibly moving, ending outside the very deli that this story,  will one day be told. One of the best two or three films I've ever seen. And I swear, my hand to god, you will love stuttering ventriloquist Barney Dunn.