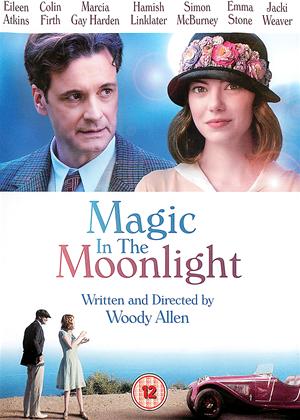 Reviews (7) of Magic in the Moonlight

Not judging it by Woody Allen standards, it just a nice movie on its own. Making a good point about magic and how much we might need the irrational sometimes. All dressed in a love story with nice dialogues (capturing the English subtlety that Allen is fascinated by lately) and a good flow overall. If you re looking for "sleeper" or "Manhattan" you might be disappointed but still a very enjoyable movie.

Period Piece - Magic in the Moonlight review by CP Customer

bland and boring - Magic in the Moonlight review by jaysha

Well acted but surprisingly not one of woody allen's best movies. Some people may disagree but all i can say is not my cup of tea.

Watchable, but shallow - Magic in the Moonlight review by AR

Despite big names like Colin Firth (lead) and Woody Allen (director), a quite unsatisfying film. Characters were shallow and the plot contrived. Nice old cars though - watch it if you've nothing better to do!

MAGIC IN THE MOONLIGHT - Magic in the Moonlight review by SM

Although good actors, a very weak film whereby the story could have been made a lot more of. An interesting plot but a bit repetitive.

Utter drivel - Magic in the Moonlight review by MI

Watching this will lead to you ask a question more profound than 'What is the meaning of life?' It is 'How could a film as dire as this be made ?' Staid, stiff acting and dull dialogue in which Colin Firth looks to be (and should be) embarrassed to be part of, it seemed to me to be some kind of attempt at Oscar WIlde-'lite'.

The only glimpse of hope is that it gives exposure to Australian actress Jackie Weaver; if you want to see a decent film watch her in 'Animal Kingdom'.

One of Woody's better films of the 2010s. - Magic in the Moonlight review by Steve

Charming, sophisticated comedy set in the 1920s on the Côte d'Azur which has the delightful frisson of a Noël Coward play. Colin Firth is the famous stage magician and renowned misanthrope and sceptic, Wei Ling Soo/Stanley Crawford who is called in to expose a popular and successful medium Sophie Baker (Emma Stone) all the way from Kalamazoo, Michigan.

Only he fails. He becomes convinced she is genuine, disorientating every belief he had assembled in his life about science and nature... before finally tumbling her. Of course, having been made emotionally volatile by her credibility as a mystic, in the time it takes to rehabilitate his faith in the laws of the universe, he has been humbled enough to finally believe in the real magic, of romantic love.

It would be too easy to underestimate this film as insubstantial frou-frou, just because it is so light, so deliciously congenial. But there is a clever script in there and some superbly nuanced scenes orbiting around the themes of faith and rationalism and a fine plot. Colin Firth is enjoyable as the pompous agnostic whose logical intelligence renders him cynical rather than wise. It is a joy to see him dally with the the charming and beautiful Emma Stone.

If the comedy has a problem at all, it is that for all it is so captivating, it isn't all that funny. I think that's because the stars just aren't comic actors. What might Cary Grant and Claudette Colbert have made of these roles. Firth retains too much dignity to be hilarious, and Stone is too passive. But that's just a quibble. This is ridiculously entertaining. And the gleaming photography in widescreen by Darius Khondji of the French riviera, is so lovely.

Magic in the Moonlight review by Michelle Sommerville - Cinema Paradiso

I love magic tricks as much as the next person, but still, this film failed to excite me. It had good dialogue, great actors, alluring visuals, and yet I still could not get past the ‘mediums’ and ‘seance’. I find it vulgar and couldn’t make myself then care for the characters. I give it two out of five stars for this very reason, but have explored the film further below.

Woody Allen’s newest film follows a magician named Stanley (Colin Firth), who is sure he knows everything. He knows how to reveal fraudulent spiritualists, yet finds himself on the cusp of believing when he meets a beautiful young woman (Emma Stone) who claims she can communicate with the ‘other world’. Is she all she claims to be, or is it all just another big trick?

Magicians and their illusions have been popular for almost as long as history records. They entertained royalty, have sparked many a discussion, and have featured in a lot of films and television shows over the last few years. The mysticism is appealing, and this film shows how even the most devout skeptics can find themselves questioning. Without revealing any spoilers, a certain turning point in the film will either make it or break it for most audiences.

Magic in the Moonlight boasts quite an impressive list of actors and actresses. Despite their age difference, Stone and Firth had interesting chemistry, but made you feel a little awkward at times.

Though I am an aspiring filmmaker, I find I dislike the works of Woody Allen. This is not because of events from his real life or his ridiculous atheistic views, and is purely a matter of taste. With so many people constantly praising him, it only makes me realise more and more that his technique is no better than any other.

Allen always manages to create interesting concepts - however much it falls apart in the later stages of production - and the same occurred for this film. Instead of trying to make it stick rigidly to his ‘wacky’ theme (like everything Johnny Depp has ever touched), he should have allowed the story to grow on its own. Just because it could then be classified as ‘normal’ does not make it bad. I propose Allen does this because his film’s ‘wackiness’ gives audiences something to focus on, and distract them from the lacklustre and cliche scripts.

The costumes and make-up were outlandish and fantastic. Everything was over-the-top and this helped the characters to keep pushing the limit and not fade into normalcy. The crew also did a very good job at capturing the atmosphere of the era, and you would think they were truly in the late-20s.

Magic in the Moonlight has received generally mixed reviews from critics and audience members. I don’t think anyone is criticising the cast, and have instead voiced their disappointment with the rest of the work.

Overall, a disappointing film, and one I wouldn’t particularly bother with.