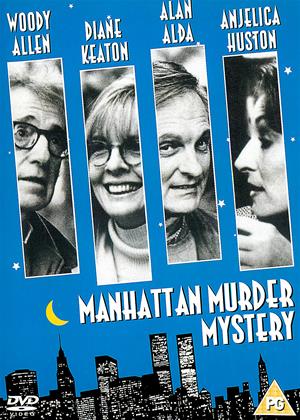 Sign up
What Have I Done to Deserve This?

An indecently entertaining comedy thriller which conjures up those crazy screwball murder stories of the thirties when a glamorous pair of socialites would get involved in a wild adventure among the nightclubs and cocktail lounges of the big city, and drive the police chief nuts.

When Woody and Marshall Brickman wrote Annie Hall they hatched a subplot with Alvie and Annie gatecrashing a whodunit. But as various other themes began to prevail, it was left out. So Woody went back to the story, cast Diane Keaton as his wife many years on, and they investigate a neighbour in their apartment building who they think has murdered his wife. Being Woody Allen, we don't get martinis and William Powell and Myrna Loy, we get a love triangle, middle aged/class anxiety and the possibility of adultery.

And it's sensational. The mystery is exciting, the script is out of this world, the jokes are laugh out loud, and it's so gratifying to have Woody and Diane Keaton back together and bickering again. I missed them. Alan Alda and Angelica Huston actually enhance the leads' legendary rapport.

The film continually drops references to great Hollywood thrillers, like Vertigo and Rear Window, and achieves film buff nirvana when the denouement plays out over Lady from Shanghai being shown in a fleapit cinema. There are no reflections on the human condition here, but wit, great acting chemistry, and ecstatic feelgood film making.