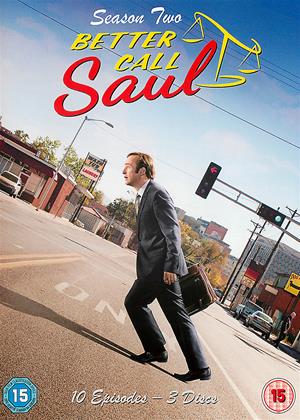 The second series of Breaking Bad’s acclaimed spin-off Better Call Saul is, in many ways, a cut above the first one. It’s fantastically written, directed and acted that brags with its slow, albeit meticulously planned pace: at moments exceeding even Breaking Bad’s own philosophy. Every frame tells its own unique story; every scene is carefully planned and executed with surgical precision. That isn’t to say the show doesn’t have its flaws, but they’re rather far and few between that it’s almost impossible to point them aloud, if anything. It boasts with the charm Breaking Bad, with few exceptions – had, while being a great show on its own, personal credit.

It seems the producers took the ‘show, don’t tell’ telltale as a core pillar upon which they based their show – and a key scene with Kim (played by Rhea Seehorn) contemplating life between two tables in a garage comes as a perfect testimony to their willingness to go above and beyond to make it work. Tons of expository and revealing details were unraveled during the second season, most of which were completely new – some of them even surprisingly so than what we’ve come to expect of such high-end production. Even better: there goes our additional rationale to justify our thirst for Jimmy McGill and friends’ endeavors, if we needed any to begin with.

One thing Better Call Saul: Series 2 can improve upon is answer some questions raised in the previous season, instead of entangling conflicts and introducing new characters with little to no relevance to the plot, as of yet. As of now, it’s far from perfect, but my criticism solely relies on how I want the series to develop further – and not how it currently IS.

Of course, Better Call Saul wouldn’t be IT without its acting lineup: Rhea Seehorn managed to single-handedly steal the whole season without raising an eyebrow. If Better Caul Saul has a hero, amidst the handful of anti-heroes we’ve come to accepts as such – then it must be Kim that’s fitting that bill. Her decisions to go against what she believes in in order to satisfy her higher moral needs, is a textbook example of how a character arc should develop in a given show. Along with Jimmy and Mike – the spine of the series, Kim completes the perfect on-screen trio with graceful flamboyance and evocative ease: if only her actions didn’t made such consequences on behalf on her firm ethical beliefs.

Furthermore, Better Call Saul: Series 2 plays between genres by a large stretch of a margin. Depending on the episode, one may get an intimate renegade drama with black comedy elements; or, if lucky enough, one can stumble upon a modern crime-thriller of the detective variety, closely resembling an all-too-well known series that goes by the name of Breaking Bad.

Things is – whichever genre you may find yourself in – you’re in for a delicious treat.