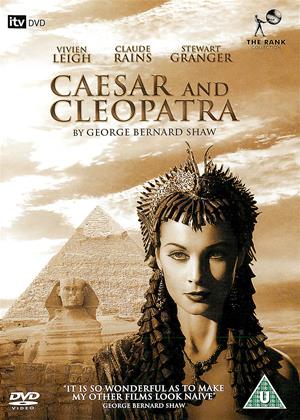 Reviews (1) of Caesar and Cleopatra

What about the eyebrows? - Caesar and Cleopatra review by RhysH

Shaw said of Pascal that he was "doing for the films what Diaghileff (sic) did for the Russian ballet. Pascal said that Shaw had "the greatest God-given gift of expressing the truth". Such talents should surely produce a great film. There was correspondence between Pascal and Shaw about the colour of Britannus's (Cecil Parker) eyebrows!

When shooting moved to Egypt days were lost because of rain! In Egypt 1,200 troops used as soldiers for the film were given papier-mâché shields held together by fish glue. The soldiers found these most edible and new shields had to be made.

The film was made using the new technicolour cameras. The resulting colour is very brash, no subtlety of shades. Stewart Grainger looks as if he has been spray tanned. The cameras were also very heavy and there is little camera movement, acting is done directly to camera in a very staged manner. All the performances, perhaps with the exception of Claude Rains, are very mannered almost hammy.

Pascal wanted the extras in the crown scenes to have individuality. It didn't quite work out for him. The crowd runs one way waving their arms in the air for fear and walk another way shaking their fists for anger. The depiction of the black slaves is embarrassing.