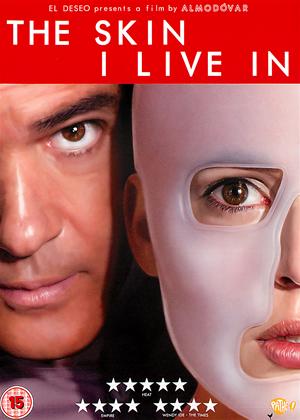 Rent other films like The Skin I Live In

Given all the downright poor blockbusters that we have been flooded with lately, it is refreshing to see a film that manages to deliver all the intrigue, excitement and quality without relying one bit on CGI! This film is like a classic film noir for modern times. Well directed, great acting, superb quality set design and the cinematography and scripts are par excellence! Be aware that this is a Spanish film with Spanish dialogue, but it has English Subtitles, which do not detract from the film at all. Without giving too much away, this is a play on the classic love triangle and kidnap theme, but with a very interesting twist that keeps you guessing. There are lots of twists and turns and the ending is just so emotional, it made me cry! Some may see this as more of a European Art House style film, but I found it very refreshing and would say that it is one of the best films that I have seen in the past year. Don't let the subtitles put you off, if you enjoy intelligent, well crafted cinema, then this is one for you. Not a family film due to it's subject matter, but suitable for teenagers and anyone with an open mind. Anyone with extreme religious tendencies may be shocked by the subject matter, but all the more reason to watch as this is real life. Bravo!!

I often like films with subtitles. What I do not like is over-rated salacious trash dressed up as meaningful euro arthouse posturing.

This director Pedro Almodovar is massively over-rated - I suspect because he gets lots of Hispanic votes from the Oscar academy.

This film is basically an old male directors sexual fantasy - all about a sex change basically. Watch Victor Victoria instead to get all about gender roles or the brilliant Argentinian film THE SECRET IN THEIR EYES. Now THAT is a great movie - and one Pedro Almodovar almost certainly ripped off to make this B movie.

And that's what it is - a sci-fi B movie fantasy, suitable maybe for an episode of the Twilight Zone if cut down to 30 minutes mas. 2 hours of this bored me and fellow viewers to distraction.

But oh my it's boring, unnecessarily nasty, and nowhere near as clever as it - or its fans - thinks it is.

A literally incredible plot that just does not hang together too.

Pretentious drivel with a Spanish accent.

Stylish and compelling. - The Skin I Live In review by NP

At two hours long, it might be argued that the story is spread a little thin. It looks so good, however, and is played so well, that isn’t really a problem.

At times during the early part of this film I was finding it hard to keep up with the flurry of characters that were introduced apace, sometimes in flashback, sometimes not. As events rolled on, though, I found they all had a place, and a story to tell.

I really enjoyed this. A great, sprawling, artily directed production, for all its echoes of classic horror films (‘Eyes with a Face’ and ‘Frankenstein’ come to mind), the result is nevertheless less of a horror than you might imagine – but I can’t see it disappointing anybody.

Of the players, Antonio Banderas gives a menacing and measured performance as Robert Ledgard, and Elena Anaya is excellent, her portrayal of the strangely self-harming Vera giving nothing away as to what is going on behind those big brown eyes. Mt score for this haunting film is 8 out of 10.

World-renown Spanish Director Pedro Almodovar reunites with his ‘Tie Me Up! Tie Me Down!’ collaborator Antonio Banderas in noir-ish psychosexual thriller of Frankenstein proportions in ‘The Skin I Live In’, where everything is not what it seems and what you see, you may or may not regret.

Antonio Banderas plays Dr. Robert Ledgard, an expert plastic surgeon who is obsessed in creating a new age, super-synthetic skin viable to transplant and graft on a live human being. Unlike regular skin, Ledgard’s creation won’t burn. It’s a twisted and dangerous science experiment, especially upon seeing that it is currently being tested on a woman named Vera (Elena Anaya) who lives in his opulent estate. Within the confines of Ledgard’s care/torture, Vera is a mysterious guinea pig and upon closer inspection, may even be too willing and able for it. She and the doctor have a perverse relationship and you’re soon quick to realize, that there’s a more sinister ulterior motive here and it is uncertain what Ledgard is really up to.

‘The Skin I Live In’ is based on the 2003 French novel ‘Mygale (Tarantula)’ by Thierry Jonquet, adapted to the screen and made more alluringly precarious by Pedro Almodovar, an artist known for celebrating women with colorful lives and equally psychedelic personalities. This time, however, his women are passive and numb, their power taken from them. Whereas in Almodovar’s previous films such as ‘Volver’, the men in the women’s lives are cruel to them, yet the females turn oppression into strength.

In ‘The Skin I Live In’, the women are just ruined forever, thanks to the brutality of one man played by Antonio Banderas. The actor’s role is a difficult balance of class, charm, and psychopath. Ledgard is a nightmare masked as a dream, and fortunately, Banderas pulls it off with incredible ease. As the Bride to Banderas’ Frankenstein, Elena Anaya is a fluid performer, using her eyes and body to elicit complex emotions under that impressive fake special effects skin.